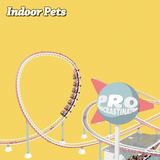 From the sunny streets of the South East of England, Get Inuit play dirty indie guitar pop. Having spent the last 12 months fine-tuning their fuzzed-out live show, supporting the likes of VANT, Spring King, The Magic Gang, PUP, Slaves and DZ Deathrays along the way, they’ve never lost sight of the earworm pop sensibility they hold so dear - and new single ’Teriyaki’ is absolutely no different.

Cracking open with a fizzing, distorted guitar line, ‘Teriyaki’ then opens up beautifully into a soaring guitar-pop explosion. Expertly recreating the intensity of their live shows (the band produce and record their material themselves), frontman Jamie expertly navigates his way around raucous guitar movements, and pummelling drum work, delivering one of the finest guitar pop choruses of the year, as the line “I can’t remember who I was before” rings out in the memory long after the track finishes.

Named as one of Annie Mac’s Ones To Watch for 2016, the band have released a number of critically acclaimed singles, namely 'Pro Procrastinator', 'My Oh My' and 'I Am The Hot Air' - to name a few, picking up unwavering support from DIY, The Line Of Best Fit, Clash, Gigwise and more along the way. Huw Stephens has played all TEN songs the band have released so far, with Radio 1 being huge supporters of the band throughout their burgeoning careers.

The band was formed in 2013 when Jamie Glass decided that he had some songs to write. Aided by Rob Simpson and Oliver Nunn, the band started writing and soon after - James, Rob’s brother, joined the band. The band have spent the early part of 2016 recording their eagerly anticipated debut album and after a successful trip to SXSW in March, they have performed non stop around the UK. With ‘Teriyaki’ teasing the release of their much-anticipated debut album, the band will be heading out on tour once again this Autumn, to showcase new material.

Get Inuit are an incredibly exciting proposition, and look set to 100% deliver on their undeniable potential.