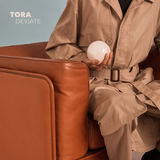 
“a hotbed of talent.. this is beautiful” – Sir Elton John, Beats 1

“Tora continue to provide us with gifts” - ACID STAG


With a month to go until the release of their second album 'Can’t Buy The Mood' on 9 August, today Tora reveal the next taste in single 'Deviate’. A brooding, soulful track, ‘Deviate’ was co-written and co-produced in London at the iconic RAK Studios with Roy Kerr (London Grammar, Lana Del Ray).

The band commented: "Deviate is about the modern human condition, outlining the disconnectedness that humanity is facing with technological addiction. A reminder for people to connect with each other more and spend less time staring at their screens. The intention behind the song is positive, ‘Let’s Deviate’.”

We took the dynamic range in this song to the extreme, with some moments being filled to the brim with sounds and other moments containing merely a single layer. In all its simplicity, this is one of the most considered Tora songs to date, a song we feel proud to have completed, with an important message that we hope people can feel a connection with."

The band are currently on tour in Europe, with their recent sold out London show giving the overseas audience a sneak preview of the forthcoming album.

13-track 'Can’t Buy The Mood' album features ‘Deviate’ as well as recently released single 'Morphine'. The album will be followed by headline shows down the East Coast in September and October.

Since release in 2017, tracks from their much-lauded debut album 'Take A Rest' have received support from respected members of the international music community. Following a coveted album packet spot on triple j and high rotation for single 'Another Case', both Sir Elton John (Beats 1) and Annie Mac (BBC Radio 1) spun tracks on their radio shows and they've now clocked nearly 100 million streams globally - a massive achievement. Tora toured nationally and around the UK/Europe with over 40 album tour shows and sold out sets in Melbourne, Paris and London. They supported Oh Wonder nationally and even found an adoring fan in Resident Evil and Fifth Element star Milla Jovovich. All of this on top of previous spots at Glastonbury, Splendour in the Grass, Reeperbahn (DE), The Great Escape (UK), Best Kept Secret (NL) and over 70 more festival appearances across the globe. It's been a size-able couple of years for these four Byron Bay locals.