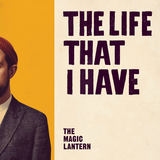 ‘The Life That I Have'

The Magic Lantern, the musical moniker of Jamie Doe, returns with a stunning new EP, ‘The Life That I Have’, out on 31 January 2020 via Hectic Eclectic Records.

Following his third album ‘To The Islands’ released in November 2018, his new EP ‘The Life That I Have’ was made whilst helping to care for his father with Alzheimers disease and confronts, sits with and acknowledges the inevitability of a loss witnessed in slow motion and the unexpected moments of joy that sustain us.

The EP opens with the compelling drums of ‘Gentle Face’, a song which addresses the everyday anxiety created by our present moment while embracing the intimacy and momentum of a late night drive. The song circles around the idea of wanting to go to sleep and somehow start over as again layers of pianos and keyboards come in and out of focus. This is followed by ‘Harvest Moon (For Dallas)’ the first of two songs, along with ‘Winter (Bill’s Song)’ which closes the EP, from his stripped back 2014 album ‘Love of Too Much Living’, about the break up of a serious relationship, to be lushly reinterpreted for his parents and the very different type of loss they are experiencing. Lyrics like ‘Where's my lover, and when's my time?' take on powerfully different meanings in this context accompanied by the rich jazz inflected orchestration that has become a hall mark of The Magic Lantern records to date.

‘From My Window’, written for a friend who passed away, centres around an insistent rhythmic keyboard figure and dark unsettled harmony before exploding into life with a trio of bass clarinets underscoring the lyric ‘That it’s not the ending, there are just more stories’. Finally, the rawest song on the EP, ‘Family Affair’, written just weeks before the recording session, sees Jamie’s gently powerful voice croon as if to you alone ‘But joy finds a way through / Through each new hole in our hearts / To even laugh at how lucky we are’. Stripped back to the basics of voice, guitar and gentle swells of recorder and organ to create a mood of quietly despairing contemplation, the song sums up an EP that confronts life’s harsh realities while finding beauty even in its darker moments.

Drawing on a wide range of influences from folk, jazz and contemporary music, The Magic Lantern is an artist dedicated to remedying the anxiety and fear present in all of us. Born in Australia, before moving to the UK at 12, Jamie adopted the stage name of The Magic Lantern and began writing songs while studying philosophy in Bristol, performing alongside friends This Is The Kit, Rozi Plain and Rachael Dadd. He lives in London and has released three full length albums in addition to a compilation of other artists versions of his songs for the charity CALM.

‘The Life That I Have’ is out on 31 January via Hectic Eclectic Records.

Jamie would like to thank Help Musicians UK for their support for the EP via the Do It Differently Fund.