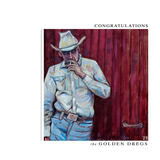 “Woods drawls his woes in baritone, mixing
Lee Hazlewood with The Magnetic Fields’
Stephen Merritt.” MOJO ****
"Cynicism wielded with seasoned sophistication, eclipsing that which
could be reasonably expected from a sophomore effort"
9/10 The Line Of Best Fit
"Truly an album to savour"
* * * * Metro
“Benjamin Woods has this fantastic rich drawl that reminds
you of The Magnetic Fields’ Stephen Merritt.”
Scottish Express ****
“A sophomore album of this stature deserves praise, and 2019 is all the
more privileged to have it.” Atwood Magazine

Congratulations is the latest single to be lifted from
The Golden Dregs' critically acclaimed sophomore album Hope Is For the Hopeless.
The Golden Dregs celebrated the release with a sold out show at
London’s SET and will be performing more dates in early November.

The Golden Dregs might be the project of just one man,
Benjamin Woods, but beyond that it’s a lot of different things.
“It’s adopted the guise of a bar-band, a lonely man with a piano, a singer with a backing band, and an awkward and insecure karaoke performance,”
says Woods. “I think of The Golden Dregs as a project as opposed to a group or a person. It’s a platform for me to explore different musical avenues.”

It makes sense that
The Golden Dregs, which is led by the rich baritone croon and Americana-tinged tones (think
Stephin Merritt of Magnetic Fields collaborating with
David Berman of Silver Jews with Dan Michaelson making the brews) of Woods, would encompass so many things after a period of such instability and movement for him. Cornwall, Manchester, Cornwall,
Germany, back to Cornwall and then onto London. Woods has spent the last several years ricocheting from place-to-place, shifting from a cockroach-infested place in Manchester to a failed relocation to Germany that resulted in him having to
temporarily move back in with his parents - all the while searching for a place of stability to make his second album after 2018’s
Lafayette. Yet for someone who has been such an itinerant in recent years,
Woods has made a record with a distinct and coherent personality that radiates the feeling of someone who has finally found where they need to be and where they want to go.