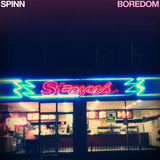 SPINN NEW SINGLE - BOREDOM “Outright sugar coated Mersey-Wave” - DORK “There’s a real buzz around Liverpool newcomers SPINN. Indie pop goodness at the drop of a hat.” - CLASH An ode to clocking off, the latest single from SPINN is Boredom online today. Written during an interminable shift as car park attendant at the Everton FC training ground, Boredom is a daydream on somebody else's time, a soundtrack to the working day for every permatemp and McJobber in our burgeoning gig economy. SPINN frontman Johnny Quinn said on the track: “I wrote the lyrics to this tune whilst stood there on the carpark where Sean and I work. It was in the middle of the winter and was raining really badly, I just wanted to go home and see my girlfriend and sleep, but I had to stand there in the rain listening to the motorway rumbling on as the sun was setting. It was a bad shift, but it was worth it though because I ended up writing Boredom, which is a personal favourite of mine. “Anyway if you’re feeling generous and you download it, then we might be able to work as full time Rock Stars instead, and never be bored, and also be able to write ‘Rock Star’ on the next Census. Imagine the scenes if any of our descendants were on ‘who do you think you are’! Think of the children!” SPINN are a band at once able to give voice the frustrations of a generation while providing blissful escape into revelry. This is the sound of young people who want to love, live and re-connect in a world of digital static, ill feeling, hard words and the mirky stream of misinformation. SPINN playlist on Spotify Their past two singles Shallow and It’s Not Getting Better have featured on several Spotify playlists, including New Music Friday, All New All Now, and The Indie List. With over two million Spotify plays from a run of eagerly consumed singles - plus support from BBC Radio 1, BBC 6 Music and Radio X - SPINN have been building a live following to match their streaming and online presence, their headline tour dates this September are selling out fast. Destined to break hearts from Huyton to Brighton, SPINN are purveyors of shimmering dream-pop. Their debut EP released in spring 2018 was produced by Chris McCrory of Catholic Action and brewed on the banks of the Mersey with the very essence of that river’s musical current. Already online the tracks Shallow, It’s Not Getting Better, Notice Me, She Takes Her Time and After Dark have been dazzling the indie blogosphere since the beginning of 2018. Misty eyed and fleet of foot, She Takes Her Time is a shot at romance and a bid for indie-disco stardom, while After Dark is break-up song staged beneath the streetlights, soundtracked by duelling guitars. SEPTEMBER HEADLINE TOUR: 21st September - Newcastle - Surf Cafe - SOLD OUT 22nd September - Glasgow - Broadcast 25th September - Sheffield - Record Junkee 26th September - Bristol - HY Brasil Music Club - SOLD OUT 27th September - London - Thousand Island 28th September - Liverpool - 02 Academy - SOLD OUT Socials: https://www.facebook.com/spinnband/ https://twitter.com/spinn_band https://www.instagram.com/spinn_band/