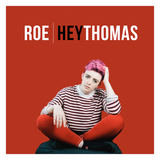 
“Delicious pop music, it's infectious and charming in all the right places” - CLASH Magazine

“A genre-defying, acerbic yet also jubilant gem of a song from an extraordinary artist.” Gary Lightbody, Snow Patrol

ROE is 19-year-old multi-instrumentalist from Derry (Ireland), Roisin Donald. Laying down her unique brand of self-styled “Grumpy Electro-Pop”, she has been blazing a trail for young female indie artists across Ireland, UK, Europe and beyond.

Releasing independently through hometown label Fictive Kin Records, and with support from Help Musicians NI, ROE has already performed on the BBC Introducing Stage at Glastonbury, been the voice of a UK wide advertising campaign to promote her hometown of Derry, had her music used as part of a TV and radio campaign for BBC Music NI, as well as TV shows on ITV, Channel 4 and Netflix.

After the success of her previous single “Wasted.Patient.Thinking.” (playlisted on radio across Ireland as well as gaining 13,000 Spotify streams on the first day of release), the young songsmith has released her latest tongue-lashing: “Hey Thomas”; an empowering tale of rising above the weight of judgement and expectation, served on a plate of upbeat electro-pop, which was nominated for ‘Best Single’ at this year’s Northern Ireland Music Prize.

“Hey Thomas is a call out to bullies everywhere. I wrote this song for anyone who has ever been picked on, pushed around, teased or made to feel small because they look or act or dress differently to what’s labelled as normal. You should be able to do what makes you feel good without feeling self-conscious because of other people’s small-minded judgements. Their opinions don’t matter, and as long as you’re happy then who cares what they think.” ROE

After being named the winner of the ‘Oh Yeah Contender Award’ (best emerging artist) at the 2018 Northern Ireland Music Prize, and supporting Mattiel in Dublin, you can catch ROE at the NH7 Weekender in Mumbai, and on tour with Snow Patrol on their UK arena tour in December and January.