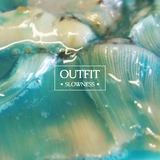 ‘Smart Thing’ is probably the most direct song from recent album ‘Slowness’ and displays the band’s way round sophisticated artful pop in the vein of Green Gartside or Paddy Macaloon. Lyrically, according to lead singer Andrew P M Hunt, it’s “about speaking up, and saying what you need. The best thing for two people, or a band or even the country you live in might not be the most comfortable thing for you personally, but it could be the difference between something working or not”.

At the beginning of 2014, Outfit found themselves scattered across two countries and three cities, separated by life and love from each other and from those closest to them. ‘Slowness’, the band's second full length LP released June 15 on new label home Memphis Industries, is the sound of its five members snatching intensive weeks to plant themselves in one place, with the tensions of touring, moving, and transatlantic relationships still weighing heavy in mind, to create an album with bold presence.

‘Slowness’ paints a portrait of distance using haunting piano, piercing synthesizers and guitars, all underpinned by Outfit's trademark rhythm section. It dwells on physical distance between lovers, the emotional distance when we return, and the ways in which we imagine each other thousands of miles apart.

Following up their critically acclaimed debut ‘Performance’, Outfit toured with Everything Everything, played the 6 Music Festival, Festival No. 6, End of the Road and Pitchfork Paris as well as several sold out London headline dates showing that the band could thrive as much in the live arena as they could in their home studio space- a Brutalist block of flats in Liverpool

‘Slowness’ is Outfit's most cohesive work to date, a marked progression both sonically and emotionally, capturing the harrowing shock of being in love and apart, and the stillness of staring into screens. Ultimately, though, ‘Slowness’ sounds like a band coming to terms with themselves as artists and people to create an album that celebrates life's obstacles: a record made between New York, London and Liverpool -- a piece of work compelled by distance.

MEDIA PRAISE FOR SLOWNESS:
“The more you listen, however, the more compelling it becomes....By the time the closer, Swam Out, heads into its grand, sweeping coda, you’ll be entranced”
- 4/5 Guardian
‘Only a matter of time before they’re one of the country’s most important bands’ 8/10 Time Out