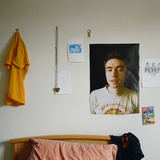 MATT MALTESE ANNOUNCES 2ND ALBUM ‘KRYSTAL’ - OUT 8 NOVEMBER ON 7476 NEW SINGLE ‘JUPITER’ NOVEMBER HEADLINE SHOWS IN CARDIFF, LEEDS, MANCHESTER, LONDON & BRISTOL “one of the most exciting emerging British songwriters in years” - DIY “a true prodigious talent” - NME “love songs for the end of the world” - NPR 22 year-old South London artist Matt Maltese has revealed details of his highly-anticipated second album’Krystal’ - out on 8 November via 7476, preceded by lead single ‘Jupiter'. Maltese has also announced a run of headline dates in small venues across the U.K., starting in Cardiff on 16 November at So Young Magazine’s Clwb Ifor Bach all-dayer and including shows in Leeds, Manchester, London & Bristol. Tickets are on-sale now - full info below. The follow up to Matt Maltese’s acclaimed 2018 debut 'Bad Contestant’, ‘Krystal' was largely recorded, produced and mixed by Maltese in his bedroom studio in Elephant & Castle with only the horn-flecked 'Human Remains’ produced by Alex Burey, and lo-fi centrepiece ‘Jupiter’ by Vegyn, while parts of it were mixed down in Margate by Tom Carmichael. *** Returning from a solo tour of the USA in March 2019, Matt Maltese found his world getting smaller, with a strong desire to hit the reset button. What followed was months of writing and recording at home in his bedroom, as well as a good deal of, as he puts it, “stewing in the past”. The resulting album ‘Krystal’ retains Maltese’s eye for a razor-sharp lyric, but also explores an exciting new palette soundscapes with swelling washes of multi-tracked vocals and electronic nuances - all complemented by his trademark starry pianos. Ostensibly a breakup record ‘Krystal’ sees Matt Maltese delving into production for the first time. As well as it being a skill he’s always wanted to develop, Maltese concedes that it was also probably an unconscious decision that he made so he could keep recording in his bedroom cocoon for as long as possible, its narrative slowly unfolding day by day, and fluctuating with the life the singer was living at the time. “My time spent with Alex Burey and Jonathan Rado in the past helped me feel like limitations could be a good thing,” Matt says of the inspiration behind helming the production of ‘Krystal’, leaning on “really simple things like trusting your gut when something sounds good but looks bad”. “I’ve never been one to waste a good crisis and I felt like I could direct all this lost, chaotically up and down energy into a big task like this.” The vocals heard on the record are almost entirely first takes, once again showing the intention to trust gut instincts and to reflect the atmosphere the album was created in, rather than striving for slick perfection. ‘Krystal’ also prioritises openness and freedom. Highlight ‘Tall Buildings’ is a hazy, swaying thing that sounds more 1969 than 2019, and is all the more wonderful for it. The sprightly ‘Tokyo’, meanwhile, invites the listener even closer, as he sings: “If you rip open my heart you’d see a whole lotta’ blood and arteries / But if I’m talking romantically, you’d see space for you”. Then there’s ‘Curl Up And Die’, the album’s emotional centrepiece. A gorgeous, reflective post-mortem on a relationship, it sees him ruminating on a time when “I worshipped the ground you walked on / I’d cut off my ear for you / I worshipped the towel you dried on / I’d kill all my friends for you.” Ultimately, ‘Krystal’ is a reckoning with self, a mental stock check, a re-evaluation and a shedding of an old skin. It’s an unafraid step into understandably terrifying territories, one that sees a young artist doubling down on certain elements of the personality he emerged with a few years ago, and parting with those that no longer fit. All it took was a bit of alone time. *** See Matt Maltese on the following tour dates: Nov 16 - Cardiff - So Young Magazine All Dayer, Clwb Ifor Bach (TICKETS HERE) Nov 25 - Leeds - Hyde Park Book Club (HERE) Nov 26 - Manchester - YES MCR Pink Room (HERE) Nov 27 - London - The Dome (HERE) Nov 30 - Bristol - Rough Trade (HERE) Matt Maltese - Krystal - out 08/11/2019 on 7476 1. Rom Com Gone Wrong 2. Tall Buildings 3. Tokyo 4. Wish You'd Ask Me 5. Jupiter 6. Intolewd 7. Krystal 8. Curl Up & Die 9. Human Remains 10. When You Wash Your Hair