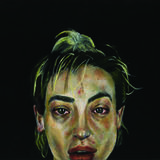 
Du Blonde may sound like a band, but in fact it is, and always has been, the work of just one person. Beth Jeans Houghton.

Her new album 'Lung Bread For Daddy' delves even deeper into self sufficiency, seeing Beth take the reigns on production, instrumentation, album artwork and direction of music videos. This project is entirely her own.

'Lung Bread For Daddy' sees a meeting in which Beth’s previous two albums, 2015’s ‘Welcome Back To Milk’ and her debut ‘Yours Truly, Cellophane Nose’, take a seat at the table and make amends. Veering wildly between proto-punk, psych rock and the wholesome song writing of the 1970’s, taking the listener on a journey through the landscape of her past. It is an honest and often uncomfortable look into the life of a person whose experiences have been touched by a myriad of characters, homes across continents, periods of extreme loneliness, mental illness and a search for an understanding of personal identity. “My lyrics are always autobiographical. I have to be able identify with what I’m singing, and telling my story is therapeutic.”

Speaking about Acetone, Beth writes, "The album was recorded in Oakland, and when I returned to London for the final sessions I already had more than enough songs for the record. The plan was to finish only what I’d started but when I returned home I wrote this song. I suddenly had access to a piano again, and when I sat down to play it, this chord progression came out, and so did the words. I don’t remember writing it. I sat down and it was there, which is interesting because it’s the most musically and lyrically complex song on the album. I wrote it about a long ago relationship with a person to whom I was totally devoted. A lingering feeling I’d had from that time was that the person maybe thought I hadn’t tried hard enough, or that I was always making mistakes. This song is me saying I did try. I tried very, very hard. The song addresses a lot of the feelings I felt during the relationship and the aftermath. One of which was dealing with a situation in which neither of us could truly manage to say goodbye. I left that relationship feeling utterly broken, whilst wearing a charade of strength that wasn’t mine. It felt like ‘It’s OK, I’m OK, I’ll wash this off with bleach, I won’t forget’.