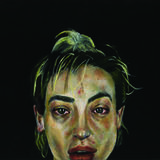 Du Blonde Announces new album Lung Bread for Daddy via Moshi Moshi on 22nd February 2019 Du Blonde may sound like a band, but in fact it is, and always has been, the work of just one person. Beth Jeans Houghton. Her new album Lung Bread For Daddy delves even deeper into self sufficiency, seeing Beth take the reigns on production, instrumentation, album artwork and direction of music videos. This project is entirely her own. “I know exactly what I want my record to sound like and apart from drums, I have the ability to play all the instruments, so I did” Houghton states. True to form, the first peak of the new album is the self directed video (Houghton has also made videos for Ezra Furman, Red Hot Chilli Peppers and LUMP) for lead single 'Buddy' which also stars a bathtub, 3 bottles of vegetable oil and 37 packets of spaghetti. Lung Bread For Daddy sees a meeting in which Beth’s previous two albums, 2015’s ‘Welcome Back To Milk’ and her debut ‘Yours Truly, Cellophane Nose’, take a seat at the table and make amends. Veering wildly between proto-punk, psych rock and the wholesome song writing of the 1970’s, taking the listener on a journey through the landscape of her past. It is an honest and often uncomfortable look into the life of a person who’s experiences have been touched by a myriad of characters, homes across continents, periods of extreme loneliness, mental illness and a search for an understanding of personal identity. “My lyrics are always autobiographical. I have to be able identify with what I’m singing, and telling my story is therapeutic”. Houghton's insatiable thirst for creation on her own terms has seen her take charge of every aspect of Lung Bread For Daddy including the brutal self portrait that adorns the cover of this record. Painted from a photograph taken during one of her lowest points, the image depicts Beth devoid not only of makeup, but self worth and confidence. “I look tired and pretty much destroyed, which is a feeling I’ve known many times over; in the aftermath of relationships and that of making a record. Lyrically the album is very naked so I’m carrying on the nudity of my previous album covers, only this time it’s emotional instead of physical.” Lung Bread for Daddy Tracklisting: 1. Coffee Machine 2. Take Out Chicken 3. Peach Meat 4. Holiday Resort 5. Baby Talk 6. Angel 7. Buddy 8. Heaven Knows 9. RBY 10. Acetone 11. Days Like These 12. On The Radio Pre-order: http://smarturl.it/LungBreadForDaddy