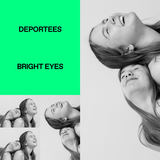 FROM THE FORTHCOMING EP RE-DREAMING OUT MAY 17


Prepare to fall in love with the sound of Sweden’s Deportees, who have released their debut UK single ‘Bright Eyes’. While unknown here, the trio from Umeå, a remote city in the far north, have long been both a critical and commercial success back home. Their most recent album, 2015’s 'The Big Sleep' was awarded the Swedish Grammy for Best Rock Album, an award the band had also picked up for their previous long-player 'Islands & Shores'.

And now, not before time, Deportees release their first single in the UK, 'Bright Eyes'. And no, it’s not a cover and has nothing to do with rabbits. Rather, the song is an empathic plea to a friend to stop crying and start healing. It’s call for new dreams free from dejection and nostalgia, and a mission-statement for the band’s upcoming EP 'Re-dreaming', which follows on May 17.

Lead singer Peder Stenberg explains of 'Bright Eyes': “Encouraging a friend to stop their crying might sound harsh, but it’s not because I lack sympathy. It’s because I need this person to function.”

'Bright Eyes' was produced by Pontus Winnberg (from Miike Snow) and recorded in his Studio Skolhaus in Mariefred, west of Stockholm. Other tracks on the EP were produced by Johannes Berglund (The Radio Dept, Ane Brun, Fever Ray etc) and Måns Lundberg (Shout Out Louds etc).

Maybe because of its geographic isolation, Umeå can be a perfect pasture for creativity. In the 1990’s, its musical trademark was the vegan hardcore punk scene starring bands like Refused. Brothers Peder and Anders Stenberg alongside Thomas Hedlund, kids back then, were transformed by this vibrant subculture. They discovered the power of music in mosh pits and soon began playing in various hardcore-bands themselves (like Plastic Pride and Reason For Anger). When the time came to rebel against the rebellion, they named themselves Deportees and drew influences from diverse artists such as Fleetwood Mac, Prince and The Band.

Over five distinctly different albums, Deportees have won plaudits, fans and awards for their constant creativity and reinvention. They managed to cop the ears of French pop royalty Phoenix, who drafted drummer Thomas to share his time between the two bands, and around the same time guitarist Anders was recruited to partner up with Lykke Li as touring band member. Two fruitful collaborations that have now lasted more than a decade and are still ongoing. While Anders and Thomas toured the world, lead singer Peder earned a doctor’s degree in Ethnology.

Chris Taylor from Grizzly Bear made a guest appearance on two songs on latest album 'The Big Sleep' (2015), which once again earned the band massive critical acclaim and saw Deportees selling out even larger venues in Sweden. And now comes the five-track EP 'Re-dreaming'. Full album to follow during fall

'The Big Sleep' was an apocalyptic album, and it makes sense: darker times makes for darker music. But even though the world is still very much a terrifying place, with EP 'Re-Dreaming' Deportees offer something wishful and emotionally engaging. They explain:

“‘Re-dreaming’ is a loving assault on the feeling of a lost future. Not because it’s necessarily a false prophecy, but because it’s a dangerous one.”

Stand by for news of upcoming UK shows.


2 Swedish National Radio P3 Guld Awards for ”Best Pop” for album Under The Pavement, The Beach and ”Best Group” for Islands & Shores