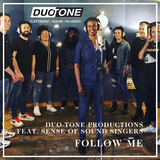 Duo-Tone Productions team up with Sense of Sound Singers to release new cover of the Disco-House anthem, ‘Follow Me’.

The original track was created by New Jersey trio Aly-Us and was executive produced by DJ Pierre, a member of Chicago outfit Phuture who are often credited with inventing the Acid-House sound. ‘Follow Me’ was originally released on the renowned Strictly Rhythm record label and was a big success for the band, reaching in the Billboard Dance Club Songs Chart Top 10. Now, Duo-Tone Productions have taken the musical and cultural heritage that lies within the song and given it a 2019 update with the help of Liverpool’s most respected choir.

Sense of Sound Singers is an award winning collective of phenomenal vocalists, renowned for delighting and thrilling audiences locally, nationally and internationally. Their incredible talent has been recognised by many big names, leading them to become the resident singers for Cream Classical and perform backing vocals for the likes of Paloma Faith, Jon Bon Jovi, Seal, Nile Rogers and Chic, Damon Albarn, Peaches, and many more! Having recently recorded with Indie-Pop sensations, Blossoms, the choir return to the studio once again to deliver this brand new track.

‘Follow Me’ captures the emotions of the choir’s renowned live performances, and condenses it into one powerful Dance track that radiates with their positive energy. By adding in their collective chorus, this modern cover builds on the original track’s understated 90’s sound and brings it to life in style. With its infectious rhythm and uplifting vocal prowess, this new release lands just in time to be your next summer soundtrack.

Sense of Sound Singers is led by creative dynamo, Jennifer John. She manages the choir and injects her soaring musical ambition into their every performance. This new collaboration demonstrates this perfectly, with Jennifer taking the song’s socially conscious lyrics (that are just as relevant today) and adds to them her own personal twist.

After establishing club nights in Liverpool, Duo-Tone then went on to strengthen the brand with an eclectic mix of consecutive House, Electronic and Nu-Disco releases. Recent singles came from the likes of KOVA (which hit the Upfront Club Charts Top 10) and Josh Hunter (which has received extensive support from Radio 1 and KISS FM). They have now expanded beyond their label/event format to present new tracks under the name of Duo-Tone Productions.

Previous releases featuring the likes of Tori Cross and Gazelle have garnered much success (with the latter hitting the UK Music Week Club Charts Top 10). This cover adds a new flavour to the label’s catalogue, giving the 90’s classic a modern reworking.