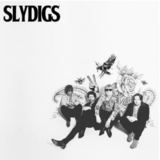 Warrington's Slydigs are set to release their new single ‘Sleep In The Wind’ on August 17 via Estupendo Universal Records. ‘Sleep in the Wind’ is the first release from their upcoming 2018 EP.

In the industrial wastelands that separate Liverpool and Manchester, four school friends formed Slydigs to escape their preordained futures in the factories and building sites of the Northwest suburbs. Growing used to standing ovations, Slydigs burst onto the rock scene supporting The Who on their 2016 tour in UK, Europe and North America.

Slydigs bring a fierce modern edge to a classic Rock n Roll sound which has received impressive and extensive audio-visual success. Slydigs sounds are instantly recognised from the opening to the London 2017 Anniversary Games, BBC 1’s coverage of the Rugby Union 6 Nations and record selling video game ‘Rock Band 4’. The sync record continues on this year's ATP Tennis World Tournament Advert which will air on national TV in 2018 plus support from JEEP via VICE/Noisey.

Slydigs are Dean Fairhurst, Louis Menguy, Pete Fleming, Ben Breslin. ‘Sleep in the Wind’ is produced by Brendan Lynch who is known for his work with Oasis, Paul Weller and Paul McCartney.

‘Sleep in the Wind’ highlightings a new era of Rock 'n' Roll with flourishes of indie-cool psychedelia. Speaking on the origins of the track the singer Dean commented, “It illustrates the pressures of growing up in the 21st Century, it’s about finding self belief in an age of 'no forgiveness', where insecurity and self doubt is very much prevalent.”