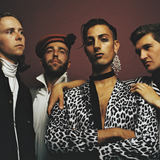 
"Recorded at the world famous Rockfield studio where The Stone Roses spent many hours and lots of money" -
Huey Morgan, BBC Radio 2
“Palomino Party are an art rock indie four piece. Of course! And why not!“ - Shell Zenner, Amazing Radio
“Glam rock meets indie and beautifully executed, lead man Linford Hydes has all the eccentricity of Boy George the passionate art rock-style vocals of Bowie” - Buzz Magazine
“Good to play them on the show, that’s got a wonderful video too” - Bethan Elfyn, BBC Introducing Wales

Palomino Party are an art-rock indie band from provincial outskirts of Cardiff. Their manifesto is one of escapism through the means of art and glamour, where they harness the boredom and alienation of suburban life and transform it into a sense of romanticism, all expressed through a guttural punk voice. The band's emblem, the disembodied head of Marlene Dietrich pays homage to the iconic glamour of yesteryear and as a symbol of individuality and beauty of their music.

Palomino Party re- release the single ‘Run Palomino’ on 21st April 2017. With an atmospheric video filmed on location in Cardiff, featuring Jack Hartley of BBC Drama Peaky Blinders together with a wealth of emerging young Welsh actors. ‘Run Palomino’ is front-man’s Linford Hydes’ ode to a youthful, forbidden love embedded within a statement of rock. ‘Run Palomino’ was produced and recorded by Eddie Al-Shakarchi at Rockfield studios.

With the band having recently expanded to a six piece for live shows ‘Run Palomino’ showcases their commercial New Romantic-esque indie-pop edge as witnessed in their euphoric live sets complete with extended line up.