TUNE HIMALAYAS - If I Tell You 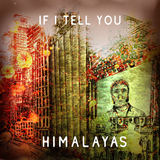 ‘Some garage rock and roll straight out of Cardiff’, Huw Stephens, BBC R 1
"It's gotta be bombastic and loud and angsty to have that title and it lives up it" - Greg James, BBC Radio 1
"You know when songs are just like a good sucker punch? I like that" - Clara Amfo, BBC R1
"I knew within five seconds of hearing this i'd like it" - Matt Edmondson, BBC R1
‘This is gonna shake your shackles away. It's proper rock and roll. It’s absolutely brilliant’, Edith Bowman, Virgin Radio
“Heard a lot about this band they're great lads”, Gordon Smart, Radio X, This Feeling Track Of The Week
‘An incredible new single’, Charlie Ashcroft, Amazing Radio

HIMALAYAS are an indie/garage rock band from Cardiff comprising Joe Williams (rhythm guitar and vocals), Mike Griffiths (lead guitar and vocals), Louis Heaps (Bass) and James Goulbourn (drums). In just 9 months they have clocked up over Radio 1 playlisting and over 4.1 Million streams for their previous for single, 'Thank God I'm Not You'. Their brand new single, ‘If I Tell You’ is next quite simply, next level fierce.

HIMALAYAS formed in 2015 and have been tipped by This Feeling and Fred Perry and have gained 6 weeks Evening Playlisting with Virgin Radio plus repeat plays from Huw Stephens, R1 as well as inclusion on Spotify’s New Music Friday UK, The Indie List, New Music Friday Canada, All New All Now, Rock Brandneu, Walk Like a Badass, The Indie List, Rocked, Rock Your Block, Rock Out and Totally Alternative. Their songs are fresh with dark moody undercurrents.

HIMALAYAS create a raw garage punk noise that hits you with a killer combination of catchy riffs and sing along choruses, all driven by the narcissistic flamboyance of youth. Their debut EP ‘Ecstasy’ was released last August via the band's own Peepshow Records with lead single ‘Cheap Thrills’, and accompanying video, bringing the band's music and presence to the fore. The band have also released the singles ‘Sigh On A Hurricane’ as the follow up to ‘Thank God I’m Not You’. All the band’s previous singles - ‘Sigh On A Hurricane’, #Thank God I’m Not You’ and their debut EP Ecstasy were produced by ESTRONS bassist, Steffan Pringle and recorded in Wales. Speaking of the brand new single, ‘If I Tell You, singer Joe Williams said, “The song plays on the idea of capitalism and the bleakness of current society. With the lyrics being inspired by the situationist movement.”


Obscuring the only certainty
Fluorescent lighting extracts any purpose

Would the pretty wounds begin to show

Ignorance is a coin for rothermere


If I tell you something you don’t know
Forget the truth and spill the past
We’ve been, dead for years


Till everything you have is sold