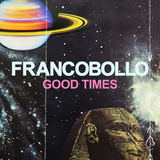 - "Sweden via London group bring a playful edge to theatrical pop" - DIY
- "This Swedish 4-piece prove that indie is definitely not dead” - NOTION MAGAZINE
- "Wonderfully off kilter Swedish indie pop"- CLASH MAGAZINE
- "Francobollo create jubilation...successfully fusing weird and wonderful together.” - THE LINE OF BEST FIT
- "Sporting the slacker sentiments of Mac DeMarco and the untameable riffs of Pavement...Francobollo's charm is their ability to scuff over the details and initiate you into their irresistible movement of not giving a shit" - LONDON IN STEREO

Following the release of their acclaimed ‘Wonderful’ EP in late 2016, Sweden’s Francobollo return today with a new single - ‘Good Times’. Possessing an irresistible charm, an undeniable wit - and an infectious personality - these three elements shine through in their schizophrenic, adventurous brand of indie rock.

"Good Times is a serenade to the bad times in life. The feeling you get when you forget how good things can be.” - the band explains. Quintessential alternative rock that's instantly identifiable as Francobollo - with this new single, the quartet are evidently in fine songwriting form. Hinting at inspiration from the likes of Pavement, Built To Spill, and Cap’n Jazz - they’re at their exhilarating best - sounding more energised than ever before.

Seamlessly switching from mellow, beautifully constructed melodic instrumentals - into wild, explosive moments of raucous brilliance - Francobollo originally met at school in Lund, Sweden, having played and recorded as session musicians for bands such as Slow Club, LA Salami and members of Mystery Jets. Cutting their teeth in North London warehouse parties, the band are equally at home in intimate holes as they are on big festival stages; always oozing with joy; winning over audiences with ease.

Mercury Prize and Brit Award winning producer Charlie Andrew took great interest in the band after seeing them play live, making them the first signing to his newly established label Square Leg Records. With the recording of their debut album nearing completion, the record itself was a test as to how to capture the band's onstage spirit - which they're now widely renowned for. This resulted in an unorthodox approach to recording the majority of the album - in front of an audience, with an aim to inject the Francobollo personality into the recordings.

Having already seen really encouraging support from the likes of DIY Magazine, CLASH Magazine, NOTION Magazine, London In Stereo, The Line Of Best Fit, Ja Ja Ja and more online, as well as receiving strong airplay from Radio 1, 6 Music, Radio X, Beats 1 and more - the band look set to make a real impact over the next 12 months, and beyond.

The band head out on a run of UK/EU dates this Spring, including support slots with Cymbals Eat Guitars, and The Vryll Society, culminating in a special single release party at The Battersea Barge on March 10th - which if the band’s previous headline shows are anything to go by - will sell out very quickly.

‘Good Times’ is out now via Square Leg Records.

Francobollo's debut album is set for release later this year.