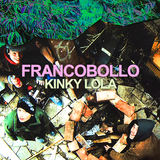 With their origins in Sweden, and now based in London, Francobollo are today introducing themselves with the wonky delights of their new single ‘Kinky Lola’.

This first offering from the band that has been produced by Charlie Andrew (Alt-J, Money, Benjamin Francis Leftwich etc.) - and will be the first release on Charlie’s new label Square Leg Records.

The first taste of what’s to come from the talented quartet, ‘Kinky Lola' is a wonderfully deranged, completely engrossing affair. Wobbly guitars and a stirring rhythm section are seamlessly welded to frontman Simon Nilsson's incensed, abrasive vocal quips - as the track builds towards a crushing, ferocious finale.

"Lyrically, Kinky Lola is about missing the honesty and the straight-forward attitude about a lot of music we grew up with” - Simon explains.

He goes on to say: "What is being reflected in a lot of music we hear - is the same feeling I get from a lot of people in general. People are tired, unwilling to create or trust emotions. Like our friend LA Salami said in his single, "everything is fast food culture" - you eat it, shit it out and forget about it.”

Distorted, childlike, energetic, excitable, mischievous; quite simply Francobollo is everything you ever wanted for Christmas, but were too afraid to ask. The members, who met at school in Lund, Sweden, have played and recorded as session musicians for bands such as Slow Club, LA Salami and members of Mystery Jets. Cutting their teeth in North London warehouse parties, the band are equally at home in intimate holes as they are on big festival stages; always oozing with joy; winning over audiences with ease.

Mercury Prize and Brit Award winning producer Charlie Andrew took great interest in the band after seeing them play live, making them the first signing to his newly established label Square Leg Records. Currently producing their debut album, the record itself was a test as to how to capture the bands’ onstage spirit - which they’re now quite renowned for. This resulted in an unorthodox approach to recording the majority of the album - in front of an audience, with an aim to inject the Francobollo personality into the recordings.

First single, 'Kinky Lola’ is out officially Friday 16th September, with an EP to follow - before the debut album arrives in 2017.