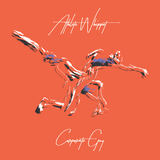 Peckham-based duo Athlete Whippet have announced their new EP ‘Corporate Guy’, set to be released on 31st May 2019 on their squareglass imprint with the title track being revealed on 18th April.

Having first debuted in 2016, the duo quickly established a name for themselves with their balmy, sun-kissed house tracks. Aviram Barath and Robin Paul Braum are self-taught instrumentalists, producers, DJs and co-founders of eclectic SE-London record label squareglass, both active in driving the scene forwards with their innovative approach to house music.

Their new EP is a refreshing hybrid of dance music with other melodically rich contemporary styles to create a distinctive genre-bending sound, a stylistic fusion that already shaped their previous releases but reaches new heights here.

The three-track release is characterised by a celebratory and vivid mood, a finely crafted fusion of sampling techniques, live recordings, synths and sequencers. Title track Corporate Guy features a sharp percussive loop and fragmented vocals, building with subtle euphoria as it progresses. The EP also includes two remixes by lo-fi house innovator Baltra and rising star on the broken beat scene Danvers, who has been nominated for ‘Track of the Year’ at the Worldwide Awards 2018 with his duo Kassian.

Athlete Whippet have previously seen their work remixed by acts like Ross From Friends, Max Graef, Seb Wildblood, Simbad and others and have been involved in curating festival stages, inviting guests such as Ian Pooley, and sharing UK club stages with icons such as Simian Mobile Disco and Teki Latex . The duo has also written and produced music for established Berlin theatre house Berliner Ensemble in 2018.

‘Corporate Guy’ EP’ will be released on squareglass. Athlete Whippet have an