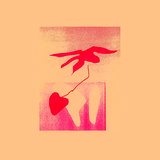 Bloomington, Indiana’s Hoops will release their full-length debut album 'Routines' on May 5th via Fat Possum, and today they share the record’s second single “On Top.” "I just felt like writing a cheesy feel-good positive song,” Kevin Krauter (vox, bass) explains. In the song’s trippy music video, Hoops perform on a public access TV show when all of a sudden the viewers find themselves immersed in the performance. Head to Gorilla Vs Bear to watch it.

Fresh off of an incredible run at SXSW which earned them praise from the likes of The Fader, Paste, Chicago Tribune and more, Hoops head to our shore for their first UK headline tour in May.

Hoops was born in frontman Drew Auscherman’s teenage bedroom as a solo ambient and beat-driven project à la Oneohtrix Point Never’s Replica. Auscherman named the band after the hoop houses at the nursery where he worked (not for his home state’s mania for basketball). Eventually, he corralled a few of his friends to flesh out his songs, and the music inevitably shifted toward something new: more melodic, more guitar-driven, more extroverted. Fast forward to 2014, and Hoops have released three cassette tapes and last year’s self-titled debut EP, which earned them heaps of praise from press, spins from radio stations across the country, and a track that hit #2 on Spotify’s Global and U.S. Viral Charts.

'Routines' is a bittersweet and honest record that sounds both warmly familiar and jarringly distinctive. Full of hyper-melodic songs, built around power-pop chords, deceptively complex drum patterns, and rock-anthem sentiments, this album marks Hoops’ first-ever studio sessions. However, this was just one step in the Routines creative process.

After a few months of touring, Hoops - which consists of 3 songwriters and an ever-shifting live set-up where the band often alternates instruments and positions on-stage - returned to Indiana to set up their gear in Krauter’s parents’ basement and began experimenting with the studio-recorded tracks. Some songs they only tinkered with, others they scrapped completely and rebuilt from the ground up. They were determined to make a record that sounded like Hoops. The result is 'Routines', the sharpest and clearest delineation of the band’s sound thus far, drawing from and emphasising each members’ distinctive influences and personal styles: a couple of guys making music that is larger than themselves.