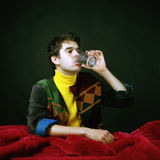 Kamran Khan, aka Fake Laugh, shares the latest single from his new LP 'Dining Alone' which was released on Friday 13th March. Speaking about the new single "The Empty Party", Khan says "This song pictures the scene of a party with no guests. Arguably, one of the aims of a party is for guests to achieve a sense of freedom by means of this joyous union. Sometimes though, it’s in our moments of solitude that we feel the most liberated. The theme of the song and the record as a whole feels slightly uncanny given current circumstances. I've noticed people online talking about the record and this song in particular, as self-isolation music." - Kamran Khan began playing music at the age of 7, when he and his twin sister, Yasmin, took violin lessons together at primary school. Over the years, violins transformed into guitars and pre-teen dalliances with Scandinavian metal morphed into an obsession with British 80s alt-pop. Aged 13, and influenced by compilation CDs from older friends at the local skatepark, Khan formed his first band. Whilst this mainly consisted of playing covers of The Cure’s early singles, Khan also tried his hand at songwriting for the first time. Fake Laugh first emerged in 2013 as a side-project to Khan’s main band at the time, eventually becoming his primary focus of creativity. Fake Laugh’s self-titled debut full-length arrived in 2017 as the delicate accumulation of years of experimentation. The album is a vivid rummage through the worlds of love, confusion and self-questioning. Khan shed the hazy, bedroom aesthetic of his debut with a quick follow-up in early 2018, Better For Me / On Loop, a contrasting pair of singles which showcased the broadening and refinement of his songwriting craft. ‘Better For Me’ stood out in particular, celebrating and lamenting loneliness in equal measure. This endeared Fake Laugh to a new, much wider audience and sparked one of the most wholesome YouTube comment sections you’re likely to find. Anticipation for Fake Laugh’s second album grew further in 2019 with the AA-side release, Honesty / Surrounded – another welcome dose of Khan’s distinctive, wonky take on the melodious pop song. Dining Alone sees Khan take a bolder, more adventurous approach to assembling an album. Liberated by the absence of a strict tracklist, recording sessions with producer, Louis Milburn, took on a more improvised feel and allowed the pair to stretch out the Fake Laugh sound. The fruits of this process are clear, with the melancholic serenity of interludes ‘Plätze’ and title track, ‘Dining Alone’, blending seamlessly with the carefree jangle powerpop of ‘If You Don’t Wanna Know’ and the languid armchair groove of ‘Exotic Bird’. The album draws from a pool of songs written between 2015 and 2018, whilst Khan split his time between London and Berlin. These tracks exhibit the varied array of writing styles he has accumulated through collaboration and his diverse musical interests. But, Dining Alone doesn’t lose sight of the melodic pop sensibilities that run throughout Fake Laugh’s back catalogue, instead, pushing them in rich new directions. The dual existence of having two hometowns is reflected on the record, with the atmospheres of the fast-paced London and the more leisurely Berlin allowed to play off one another and permeate the music in equal measure. This mood is encapsulated best on ‘The Empty Party’ which imagines a party scene with no guests. Khan notes how, ‘One of the primary aims of a party is for the guests to achieve a sense of freedom through a joyous union. Sometimes though, it’s in our moments of solitude that we feel the most liberated.’ The album’s title raises a similar notion, with Khan observing that, ‘The act of dining alone is either awkward and embarrassing or honourable and enjoyable, depending on who you ask.’ It is this sense of duality that runs throughout the album, connecting the beautiful assortment of idiosyncratic pop songs that Khan has assembled on Dining Alone.