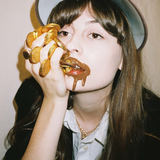 Faye Webster, the 21-year-old Atlanta-based singer-songwriter and decorated photographer, announces her third full-length album, Atlanta Millionaires Club, out May 24th via Secretly Canadian. Atlanta Millionaires Club is an album stitched together by intimate songwriting about lonesomeness in spite of Webster’s connection to a larger community. New track, Room Temperature, communicates this clearly, acting as a breezy recollection of Webster’s day-to-day life. The song simmers with a rattling bass line and the fleeting twang of pedal steel as Webster vocalizes her own inversion, trying to be at peace with being alone. “Pedal steel has always been one of my favorite instruments and I generously sprinkle it throughout the record, but in ‘Room Temperature’ it is unarguably prominent. It is the first thing you hear in the song and I wanted the visual to mirror the feeling of hearing this Hawaiian/bendy/Spongebob guitar, and what better way to capture it all than Miami?” The self-directed video shows Webster herself in different settings; on a synchronized swim team, dancing on the shoreline with backup dancers, and playing guitar on the beach.

Atlanta Millionaires Club is in Faye Webster’s feelings, and that’s the way she likes it. Atlanta Millionaires Club is a genre-bending collection of songs, bringing together Webster’s feather-light vocals, intimate songwriting, and her acumen for being strikingly vulnerable and brave. Pulling from a familial lineage of folk storytelling and time spent in Atlanta’s hip-hop scene (notably rap collectives PSA and Awful Records), Webster’s work is a study of duality, weaving through her own introversion and heartbreak; it’s an idiosyncratic sadness punctuated by fleeting observations and an unexpected, sly sense of humour.

Atlanta Millionaires Club was co-produced by Webster and Drew Vandenberg and recorded at Chase Park Transduction in Athens, Georgia. Throughout the album, Webster foregoes genre, trying to avoid sounding like any contemporaries. She didn’t set out to make her new album sound like any artist in particular – but she cites Aaliyah as her main musical inspiration for how she uses sound. “That’s where I first heard, ‘Oh, there’s this weird guitar that’s bendy and it could totally be in a country song,’ but the way she’s using it is what makes her music so special to me,” Webster explains. Webster lifted the Atlanta Millionaires Club title from the name her father used for his group of up-and-coming friends in grad school that went on to become a sponsored club that competed in 5k races and donut eating contests for charity, the name a showy, stark contrast with the friends’ reality.