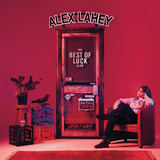 Announces:
- brand new single ‘Don’t Be So Hard On Yourself’ + video out now
- new album ‘The Best Of Luck Club’ out on 17th May via Dead Oceans

Melbourne-based songwriter Alex Lahey announces her sophomore album, The Best Of Luck Club, out May 17th on Dead Oceans. In conjunction with today’s announcement, she shares lead single and self-care anthem, “Don’t Be So Hard On Yourself,” and its accompanying video. Winning early support across Billboard Consequence of Sound DIY The Line of Best Fit Stereoboard Stereogum, Lahey returns with an even broader spectrum of emotion and sound.

We last heard from Lahey on her remarkable debut, I Love You Like A Brother. New album The Best of Luck Club picks up where Brother left off, but sprints forward with killer hooks, her acute sense of humor, and a more polished sound. Throughout, Lahey’s sharp songwriting and propensity for taking personal minute details and transforming them into anthemic pop-punk is showcased as she sings about self-doubt, break- ups, mental health and moving in with her girlfriend. Here, Lahey documents “the highest highs and the lowest lows” of her life to date.

For The Best Of Luck Club, Lahey landed in Nashville for intensive songwriLng sessions. She would sometimes lock herself in a room for 12-hour days, and ended up churning out more than half the songs for the record. Most significantly, she found The Best Of Luck Club thesis while she was there. “In Nashville I was really inspired by the dive bar scene there and the idea that at these dive bars there's no pretenLous energy," she explains. "Whether you've had the best day of your life or the worst day of your life, you can just sit up at the bar and turn to the person next to you - who has no idea who you are - and have a chat. And the response that you generally get at the end of the conversation is, 'Best of luck,’ so The Best Of Luck Club is that place."

The month-long recording process took place in her hometown of Melbourne at Sing Sing South. Lahey co- produced the album alongside Catherine Marks (Local Natives, Wolf Alice, Manchester Orchestra), who she credits as a humorous guide that improved her attention to detail and self-confidence. Lahey plays nearly every instrument, even returning to the saxophone, which she said began as a tongue-in-cheek decision but turned into an ode to her past studying jazz saxophone at university.

The Best of Luck Club Tracklist: