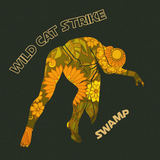 The next focus track for Wild Cat Strike’s Mustard Coloured Years EP is the monumental “Swamp”, which has had early support from BBC Introducing in the South.

This follows upfront singles “Mustard” and “Toothcutter” which gained airplay from Huw Stephens on BBC 6Music and Radio 1, and John Kennedy on Radio X, to name a few, adding to previous support for the band from the likes of BBC 6Music’s Steve Lamacq and Radcliffe & Maconie, and Dan P Carter on the BBC Radio 1 Rock Show.

Wild Cat Strike had booked an extensive run of spring 2020 UK/EU headline tour dates in support of the record, but have now postponed these due to the coronavirus crisis – more dates TBA.

Their new material finds band channelling their gleeful sense of cacophony and flair for sonic abrasion into engrossing, off-kilter indie pop songs that hook hard on the heartstrings as they crisscross in and out of chaos.

“Swamp” combines beautifully delicate, twinkly piano with a huge, post-rock-infused guitar hook, leading into a heartfelt and wry vocal, backed with the band’s trademark rabble-rousing gang vocals – carried along by a stellar rhythm section that has one foot planted firmly in math-rock territory – all of which makes for an emotive, unique, and downright catchy earworm.

Frontman Danny Byrom says, of “Swamp”: “I wanted to make a song where parts were almost an onomatopoeia, the slow slugging distorted guitars encapsulating that stuck sinking feeling. The song is kind of about inevitability and mortality, and like a swamp the harder you fight something you cannot control the more you’ll struggle to keep your head above water. It sounds very bleak but after the passing of someone I was once very close to, the only thing you can do is hope that the sun is shining. (Hell, then maybe there’d be no swamps in the first place)”

Elsewhere on the EP, “Toothcutter” is a track about self-fulfilling prophecies, the notion of destiny, and accepting your struggles as just being part of the bigger picture, while Byrom says, relating to “Mustard” and the EP as a whole: “Mustard can be quite a divisive colour... whether it’s on some wallpaper or a suit shirt. And our thoughts can be both tasteless and inspired, dependent on context. Just like a pair of mustard-coloured corduroy trousers.”

The Mustard Coloured Years EP is another accomplished step in the right direction for this slow-burning, soulful, noisy-beautiful Brighton quartet. Recorded and mixed by former WCS drummer Joe Caple and mastered by Liam McMillan (Small Pond), sessions for the record took place at Echo Zoo, Eastbourne (as used by Paul McCartney and, um, Toploader...) in 2019.

Thematically, the “Mustard Coloured Years” EP carries on where their debut album ‘Rhubarb Nostalgia’ finished—the closing line of which (“I can’t complain”) being the opening line of the new EP. “For me this works as a p.s at the end of a letter,” says Byrom of the record, “the stories not yet fully told. Lyrically it has similar themes—the grand narratives in life. I think it’s hard to avoid.”

“I like to find unique analogies that haven’t been found, but once heard they seem like they have always existed; the loud wallpaper in a quiet room, traffic jams bringing in a red brake-light-coloured sunset, the night disguising the roads as strips of liquorice, wondering who tamed the carousel horses, a cherry branch in at random signifying good luck, the easiest thing to do being to learn the hard way, trying not to worry where you are going to sleep at the end of the day knowing that heaven’s always got a spare room; just in case...”

The foursome have enjoyed press support from CLASH, DORK, God Is In The TV Zine, Echoes & Dust and many more. Over the past few years they’ve slowly but surely developed their formidable sound via a relentless slew of live shows including sets at ArcTanGent, 2000 Trees, Y Not Festival, and Bad Pond Festival, and dates with The Xcerts, Delta Sleep, Tigercub, LIRR, Natalie Evans, I Feel Fine, and more.