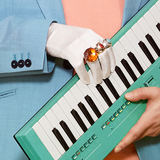 “Fou” (and its English-language version “Exit”) is the first new offering from French outfit L'Impératrice following two years of life on the road. Meaning ‘crazy’ in French, “Fou” embodies the denouement of a decadent last decade and it promises to be a watchword for the future too.

“Fou” is a song made for losing oneself to on the dancefloor (or helping to create an imaginary dancefloor in lockdown times), with its convulsive rhythms and sonic playfulness - a tune swaying ecstatically in a decompression airlock situated between two glorious eras.

Produced by Renaud Letang (Feist, Philippe Katerine) and mixed by the incomparable Neal Pogue (Outkast, Tyler the Creator, Janelle Monae), “Fou” was mastered by Mike Bozzi (Kendrick Lamar, Childish Gambino) with a video directed by Edie Blanchard. This devastatingly funky first offering from L’Impératrice since 2018’s Matahari album is a tantalising taster of what’s to come...

The celebrated, sequinned, space disco six-piece are gearing up for their forthcoming second album release, and they already had a host of high profile live dates lined up in 2020 including Coachella, California; Printemps de Bourges, France; Ceremonia, Mexico; The Great Escape, Brighton, with sold out dates in Amsterdam, Berlin, Hamburg, Brussels, Bordeaux, New York and Montreal. There are also two special shows planned at La Cigale in Paris on March 4 and May 28. Some/most of these shows are now postponed due to the coronavirus crisis – please see announcement of rescheduled dates in the near future.

With a high profile across the national media in France and beyond, adding to tastemaker support including the likes of Mixmag, i-D, XLR8R, Line Of Best Fit and The Arts Desk, the band have also had heavy playlisting on national radio stations worldwide, as well as major UK airplay from the likes of Lauren Laverne and Amy Lamé on BBC 6Music.