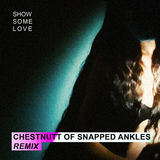 “Show Some Love (Chestnutt of Snapped Ankles Remix)” is the latest single from Dizraeli’s upcoming LP The Unmaster : REmixes & Versions, and this track launches to radio alongside a remix of “The Infinite Mix” from Tom Excell (ONIPA / Nubiyan Twist).

The single comes in the wake of major media support for the powerful and poignant album The Unmaster, which dropped in late 2019 and was hailed number four Album of the Year in Gilles Peterson’s Worldwide Awards.

With momentum around the project continuing to build, were it not for the coronavirus 2020 would have seen the Bristol-born rapper, poet and producer exploding onto the live circuit, with his band booked at festivals such as We Out Here, Glastonbury, WOMAD and Germany’s Fusion Festival, as well as completing a large scale headline tour, and a live BBC 6Music session for Tom Robinson.

As it is in the new weird world, the love for Dizraeli and The Unmaster project has only grown and his Mad Love Livestream series became a cult lockdown fixture, while the first two singles from the REmixes & Versions LP (the first a remix from Danalogue of The Comet Is Coming and the second a floor-filling remix from Diz himself ft. Orifice Vulgatron of Foreign Beggars) have garnered love and plays from the likes of Jamz Supernova, LeftO, Tom Ravenscroft on 6 Music and Simbad on Worldwide FM.

On this new single, Chestnutt (of psychedelic post-punkers Snapped Ankles) reinvents Dizraeli’s chaotic orchestral number “Show Some Love” as a four-minute long masterpiece of electronic unrest, with a ghostly vocal line twisting round Dizraeli’s pitched-down chanting as Chestnutt whips his synthesizers into a tempest. The energy is electric, with sudden cascades of skittering drums and an epic atmosphere reminiscent of Diz & Chestnutt’s TRC studio-mates The Comet Is Coming.

Here is Chestnutt himself on the process he went through for this collaboration:

“Dizraeli and I both have a studio at the Total Refreshment Centre, and I heard and enjoyed his whole album at a play-through evening. He’s a talented guy, and you never know what you might end up working on whole chatting over a cup of tea in the kitchen at TRC. I was drawn to this track - the original was only just over a minute long and sounded like a surreal 1930’s New Orleans circus troupe of Elves/insects/aliens sneaking through a forest… then you wake up briefly and have a follow on dream with added synthesisers… that was the remix…

Like a psilocybinic pathway through the woods, getting more and more playful/sinister/other worldly and then bringing you safely back and lighting a fire for the night…

Thinking about it now, it’s a bit like the scene in original 1971 Willy Wonka where the Oompa Loompa’s go all dark n trippy on the boat in the tunnel, and Gene Wilder recites a poem over the top. But that wasn’t what I had it mind when making it, though – like a dream, it made itself, like a mycelium network; I never quite knew the destination.”

“Show Some Love (Chestnutt of Snapped Ankles Remix)” is accompanied by a hallucinogenic video (coming soon) co-created by Dizraeli and Daisy Dickenson & Jordan Copeland of Tentacle Films - an alternately dark and vivid visual world in which night becomes day and the troubled protagonist follows dogs and people through a strange tilting city, finally coming home to a symbol of hope on a stairway, in the form of Dizraeli’s own pregnant partner, the French choerographer and contemporary dancer Nina Santes.

On the B-side here, Tom Excell of ONIPA and Nubiyan Twist gives The Unmaster’s closing instrumental track “The Infinite Mix” a turbocharge for the dancefloor, combining the distinctive Afrofusion bounce of ONIPA with a darker-edged garage sound and climaxing with an ecstatic half-time drum breakdown that seems to fall open into outer space.

This single release also marks the pre-order launch for the REmixes & Versions LP which drops at the end of October in a limited run of neon-pink splatter vinyl, and besides Danalogue, Orifice and Chestnutt includes remixes and features from some of the most celebrated forward-thinking artists of 2020: Alabaster deplume, Spoek Mathambo, Afriquoi, SMBD (Worldwide FM).