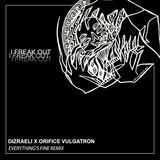 Dizraeli (Gilles Peterson’s Album of the Year 2020 nominee, Worldwide Awards) weighs in to these difficult times with a club track about anxiety that transforms panic to pure dance energy, that has already seen plays from LeftO, DJ Khalab and Worldwide FM.

Featuring a legend of UK rap, Orifice Vulgatron of Foreign Beggars, with I Freak Out (Everything’s Fine Remix) Dizraeli steps up to the plate as a groundbreaking remixer, reinventing his own I Freak Out as a fierce and uplifting 140bpm banger : a voyage through bassline and grime with flavours of baile funk and early dubstep, and finishing on the dancefloor with an irresistible 4-to-the-floor bounce – with a lyrical inventiveness that makes this one for both the club and your headphones.

With the effortlessly elastic and surreal lyricism that is Dizraeli’s trademark, and Orifice Vulgatron attacking the beat with unflinching rage and lyrics that couldn’t be more timely (on themes including the rampant social inequality and the rise of populism and polarisation within our society), with I Freak Out (Everything’s Fine Remix) Dizraeli has created a unique sonic world.

I Freak Out (Everything’s Fine Remix) is the second track taken from the forthcoming The Unmaster - REmixes & Versions LP (out September 2020 via Continuous Breath). The first was the psychedelic Detroit-techno infused remix from Danalogue (The Comet Is Coming), and the project has many more treats in store including remixes and features from Afriquoi, DJ Simbad, Alabaster DePlume, Chestnutt (Snapped Ankles), Lex Amor (Steamdown), Tom Excell (Onipa / Nubiyan Twist) and Spoek Mathambo (Subpop).

The original album, The Unmaster, has received acclaim from tastemakers such as Gilles Peterson (who called the record “incredible”) and Tom Robinson (who booked Dizraeli for a live BBC 6Music session – now postponed due to Covid-19), as well as gushing reviews from the likes of Line Of Best Fit, and many spins on BBC 6Music, Worldwide FM and Radio X. This has been reflected in an ecstatic reaction from fans. >>>

The Unmaster has seen Rowan Sawday, AKA Dizraeli, illuminating his own mental health experiences in exceptionally vivid style. This is something he embodies and carries through all his interactions with his fans. His live performances, while also bringing wildly impressive, must-see musical moments, are notable for their vulnerability and electrifying sense of catharsis and human connection.

Inspired by the Zen Buddhist concept of Beginner’s Mind, ‘The Unmaster’ is a phrase that represents an upending of the need for control and mastery over one’s life. It was the core tenet of Dizraeli’s own recovery from a mental breakdown, and it’s a theme that resonates on a universal scale right now, with so many people experiencing extreme uncertainty, fear, and a loss of autonomy; when it is clearer than ever that the commitment to open up the public conversation around mental health, at all times, paves the way for people to reach out and to find solace.

With empathy and compassion, finely-developed musical chops, and the lyrical instincts of a poet-comedian, Dizraeli ensures the darkness and raw angst in his songs is inextricably bound up with hope, acceptance, and the promise of lighter days ahead.

On his REmixes & Versions collaborations, the multi-instrumentalist poet and producer Dizraeli further confirms his place among the most engaging and vital artists working in music today.