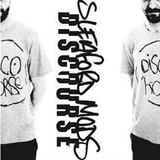 Jason says: “’Discourse’ chapters that dark silence in the vaults of the unskilled worker. The acceptance of all that is horrible and endured. Moments of connection between living vessels are rare, but sometimes they do pass through the wire and lives are understood for a flicker of a second.”

To add to the excitement of securing their first Top 10 record with ‘Eton Alive‘, the band have announced the largest London show of their career - Sleaford Mods, live at the Hammersmith Apollo on 15th November.

“The xylophone-led ‘Discourse’ could be seen as a national address. As ever, Sleaford Mods are a voice that must be heard.” -The Guardian ««««

“Unstoppable beats lyrics that mash the too-real into the surreal, and choruses that won‘t leave you alone.” - The Independent ««««

“Andrew Fearn’s sounds capes improve with each album.” - The Observer ««««

“Leaves you galvanised, purged and recharged for the unending war against mediocrity.” - Mojo ««««
“Midlands punk-rap duo mine ‘80s R&B for poppiest album yet.”- Q Magazine ««««

“A band that have no plans to vacate their unexpected platform anytime soon. - Uncut ««««