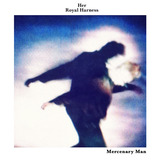 "Experimental but gimlet-eyed electro pop, in the vein of Eurythmics and Grace Jones where textural eccentricity underpins chart-focused immediacy." The Sunday Times

"A fresher take on pop as we know it" Notion Magazine

"If you haven’t heard of Her Royal Harness yet, you most likely soon will." Hunger TV

‘MERCENARY MAN' IS NOT A LOVE SONG. Part alt. pop anthem, part baroque lament, this second single from UK act Her Royal Harness' debut album ‘The Hunting Room’ is a hypnotising mix of classic 90s rock drum patterns, explosive tribal toms, broken post punk guitar melodies and dazzling synth flourishes. For the astute listener, the fragmented ghosts of The Fall, The Velvet Underground, Echo And The Bunnymen and New Order can all be found lurking here.

“You could say this is a song for anyone who ever stabbed you in the back. There are mercenaries everywhere,” says Her Royal Harness’ songwriter/singer Helene Jaeger.
Hailing from London and Bergen, Norway respectively, Her Royal Harness seemingly appeared out of nowhere this spring to acclaim from some of music’s most discerning critics. The pair describe their sound as ‘romantic battle hymns’ or ‘laptop rock’, creating hard-hitting genre-synthesist pop songs that make it clear they aim to play by their own rules entirely.

Former teen punk Jaeger is not your typical Scandinavian pop female but inhabits an altogether darker, brooding place more in line with rock’s archetypal outsider – ill-fated attempts at escape, disillusionment, a fascination with death and violence, destruction, conflict – while producer-instrumentalist Dylan Long combines seemingly disparate influences into a surprisingly cohesive sound that owes as much to post-punk, hip hop and 90s rock as it does Transmat techno or Jack Tracks.

Released earlier this summer, Her Royal Harness’ debut album ‘The Hunting Room’ inhabits the largely uncharted terrain between the mainstream and the leftfield, a place where this unorthodox band feel at home. According to Jaeger: “We see it as the most interesting place in music right now. It’s completely wide open, no rules, no pretense.”
In an attempt to express something new that reflects the strange and disorienting times we live in, Her Royal Harness have set out to create a world of dynamics and contrast where violence and love, sex and death, the synthetic and organic, the high and the low exist side by side.