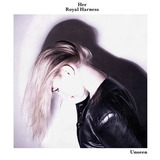 Her Royal Harness ‘UNSEEN’ (03:48) OUT 03.06.2013 UK/NO pop project Her Royal Harness’ debut track ‘Blood + Fire’ has been circulating online for the past few weeks, steadily gaining the group a number of enthusiastic, albeit mystified fans in the media who have been intrigued by the group’s enigmatic presence coupled with their visceral expression. ‘Unseen’ is the first single from the group’s debut album ‘The Hunting Room’ – mixed with Justin Gerrish (Vampire Weekend, The Strokes ++) – and comes on like a genre-synthesist, romanticist take on the classic pop anthem. Inspired by KRS-One’s influential 1993 hip-hop track ’Sound Of Da Police’, the primal, pounding drum pattern of Velvet Underground’s ‘Heroin’, analog synth arpeggiators and film score strings played through 90s boom boxes, ‘Unseen’ is a paean to disillusionment in the tradition of songs like The Jam’s ‘Town Called Malice’. “I imagine ‘Unseen’ almost like a still frame from a scene out towards the precipice, at the point where you’re faced with the choice of whether to continue on to potentially find something new or to let yourself be lead back to safety,” says Her Royal Harness’ Bergen, Norway-born vocalist/songwriter Helene Jaeger. “Actually, when the song turned up in my head, my first instinct was to brush it aside because I noticed that the chorus must have been influenced by me hearing KRS-One back in second grade, when I used to watch music videos when I came home in the afternoons. I’m glad Dylan (Long, producer-instrumentalist from London who makes up the other half of Her Royal Harness) pushed me to stick with it. Our song obviously ended up being an entirely different ‘beast’ than KRS-One’s.” Her Royal Harness approach making pop music from the anything goes, boundaryless position, and their debut album ‘The Hunting Room’ sees the two musical collaborators pushing a variety of influences through their own distinctive filter - southern gothic writing, Metroplex techno, Holland-Dozier-Holland, early rock'n'roll, hip-hop, Solid Gold-era Gang of Four, Echo and the Bunnymen, Baroque classical music, and an obsession with the late 1980s Eventide H3000 effects unit, all firmly anchored in clear melodic structure and Jaeger’s Quixotic delivery. On the origin of the group’s moniker ‘Her Royal Harness’, Jaeger says: “From the time you are born, people around you continually attempt to define who you are. That's one way of looking at the harness.” ‘The Hunting Room’ is due out 24th June 2013, produced and recorded by Her Royal Harness in their basement project studio in Bergen, Norway and mixed by Justin Gerrish at DNA Studios NYC. Released on the group’s own imprint, Manufacture. Available for pre-order at Rough Trade and iTunes now For all radio and press enquiries please contact Ellie Clarke at ellie@prescriptionpr.co.uk or call 01223 505 328