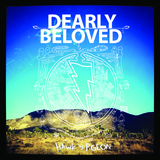 Originally released May 22, 2012 in Canada, Hawk vs. Pigeon is the latest buzz bomb from bass masher Rob Higgins and fellow co-vocalist Niva Chow who, together, form Dearly Beloved. Now it’s being reissued especially for the UK, featuring completely new album artwork, an inspired and fresh re-sequencing of the album and a previously un-released bonus collaboration called “Never Tell The Truth” with Patrick Pentland of Sloan.

Hawk vs. Pigeon, wasn’t actually meant to be a record. It wasn’t meant to be anything. It was just meant to be. It existed as a very large, impenetrable and seemingly aimless digital sound file dragged home from a cathartic desert session at Joshua Tree’s infamous Rancho de la Luno studio – for nearly a year before the hard-working Toronto band had a chance to sit still for a minute to finish and master. But when they did, Hawk vs. Pigeon became a monstrously sublime slab of stoner/shoegaze/psych/prog/Goth/punk/pop.

It was virtuoso bassist, co-vocalist and bandleader Rob Higgins (the nephew of Rush bassist sans pareil Geddy Lee) who rallied the troops desert bound. A couple of years previous, Higgins – wracked by the too-early death of his father and subsequent, intensive preventative surgery that removed 80% of his large intestine to spare him a similar fate – had absconded to the California desert for 10 days in a haze of grief, pot smoke and post-recovery morphine to get his head together. It worked. The desert, in his words, “kicked my ass,” and he returned to civilization after all that soul-searching with the dream of making a record out there in the dunes. Some friends in Los Angeles, casually let slip that they knew some people with “a little desert spot” they ran as a studio. That “little desert spot” turned out to be Rancho de la Luna, the Joshua Tree haunt responsible where a bunch of Kyuss, Queens of the Stone Age and Eagles of Death Metal records were made and presided over by musician and studio multi-tasker Dave Catching – not to mention Joshua Homme’s celebrated Desert Sessions series.

“We didn’t go there with any songs,” says Higgins. “We just booked five days, showed up and every morning it was the same: we’d wake up – me and Niva and Gavin (Maguire, drummer) would be the first ones there – and roll a huge joint and make a big pot of coffee and once I was super-baked I’d grab the bass and the first cool thing that I played we’d work out and turn into a song. And we’d do that all day until the whole track was done. And at night, we’d cook a big dinner, start drinking tequila, smoke more joints and do the whole thing until morning. And in five days we had a record. We didn’t use any click track, we didn’t use any ProTools session files. We just turned on the computer, turned on all the machines, hit all these old pre-sets – everything was vintage and old – and just dumped it all into the computer. So when we got home it wasn’t all broken up as songs. It was just one session file with eight hours of jamming. It was, like, ‘What am I gonna do with this? I just picked good performances. Whatever it was, it was.”

Legendary Jack White/Queens of the Stone Age soundman and Rancho de la Luna regular Hutch would also turn up periodically during recording to offer praise, make soup and whisk the band away “to inspirational places in the desert,”. Catching, for his part, wound up contributing guitar to Hawk vs. Pigeon’s fond Sonics cover, “He’s Waiting,” and “Living Proof.” Back home, while Higgins finally set about producing the record in earnest after a belated year on the road in support for Juliette Lewis, Sloan and Die Mannequin, further contributions came from Broken Social Scene’s Brendan Canning, who lent guitar to “Miles” and piano to “Doves Above the Door”; Sloan guitarist and tireless Dearly Beloved cheerleader Patrick Pentland on “To Better Days”.

Dearly Beloved had the title Hawk vs. Pigeon in mind at Higgins’s downtown-Toronto studio when a hawk and a pigeon lent the band some further, unsolicited perspective. Chow was doing one of the last vocal takes and a hawk flew into a tree outside the studio window with a pigeon in its grasp. It proceeded to disembowel the poor bird in front of her as she sang. We won’t even bring up the point that this whole, sordid tale began with Higgins having his own guts torn out. That would be too weird and airy-fairy. But still…