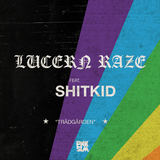 Thanks to some downtime due to the current pandemic, Luke's found some time to revive his Lucern Raze project, and over the past 6 weeks ended up making a full LP. Taking quite a dramatic turn from the garage-pop Stockholm One album released in 2015, INTERNATIONAL BREAKDOWN jumps between 90's big beat, lo-fi hip hop and psychedelic punk.

The album will be released digitally May 20th, and the vinyl will ship out as soon as they arrive (expected in July) and have been hand stamped and numbered.