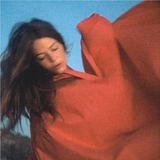 Maggie Rogers today releases her first new music of 2018 – the searing, richly layered “Fallingwater,” is out now on Polydor Records. The song was produced by Rostam Batmanglij and Rogers.

Rogers will be joining HAIM on a series of US, UK, and European dates, including two nights at Alexandra Palace in London on the 15th and 16th June. Maggie will also return to the UK in August to play the Reading and Leeds Festival.

Rogers is a producer, songwriter, and performer from Easton, Maryland. Following her education at NYU’s Tisch School of the Arts, she released her debut single “Alaska,” which hit #1 on Spotify’s Viral 50 in 23 countries, including the U.S. With more than 80 million global streams to date, it earned Rogers a place on the Spotify Best of 2016 list. Her debut EP, Now That The Light Is Fading, followed in 2017.