TUNE Maggie Rogers - On + Off 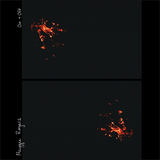 PR:
Maggie Rogers is thrilled to unveil a third track from her forthcoming debut EP, Now That The Light Is Fading. “On + Off” written by Rogers and co-produced by Rogers, Nick Das and Doug Schadt.
Polydor Records will release Now That The Light Is Fading, on 17th February 2017. The EP features four tracks written, produced and performed by the 22-year-old multi-instrumentalist, including the singles “Alaska” and “Dog Years,” which have in excess of 27 million streams combined worldwide, across all platforms. “Alaska” – which Rogers will perform when she makes her US television debut on The Tonight Show Starring Jimmy Fallon on February 15th – charted in Spotify’s Viral 50 in 40 countries and hit #1 in 23 countries, including the U.S. It earned Rogers a place on the Spotify Best of 2016 list and set the stage for widespread international acclaim, including a spot on the BBC Sound of 2017 list.
The official video for “Dog Years,” which can be seen HERE, was shot in Rogers’ childhood summer camp in Maine. It was directed by filmmaker Zia Anger, who also helmed the video for “Alaska,” which has more than 2.4 million views.
Maggie is currently out on her first live tour, which includes two long since sold-out nights at London’s Omeara on the 27th and 28th February.