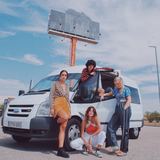 Artist: Hinds Track: British Mind Impact Date: 14th December Label: Lucky Number Assets: WAV / Press Release / Pack Shot / Press Shot / Lyrics /Label Copy Socials: Instagram / Facebook / Twitter PR: "Like its title, ‘I Don’t Run’ is firm, assured and powerful” - DIY “That cheery yet punk-as-fuck attitude is studded through their second LP.” – NME “‘I Don’t Run’ enhances Hinds’ endearing charm and espirit de corps” – Clash “A triumph that shears off the fuzz of their debut, but leaves their charm intact.” - Triumph of the Week, Sunday Times Culture “A chemistry that can’t be manufactured.” - Uncut Hinds have had a action-packed 2018 – they released their second album I Don’t Run back in April to rapturous reviews; the charisma and charm of their debut remained entirely intact whilst the band’s sound widened in scope and depth. Since then they have toured across the globe and played at some of the best festivals in the summer calendar, sharing their inimitable live to exuberant audiences. Today the Madrid 4-piece share a brand new single titled “British Mind”, aptly named as they set their sights on a 17 date UK tour which will be the band’s longest and largest to-date, including a very special one day curated mini-festival titled Party Planet at London’s 1,500 capacity EartH (Hackney Arts Centre) on Saturday 1st December, the perfect round-off to the band’s colossal year. You can watch the sun soaked accompanying video for “British Mind” HERE which sees the band making the most of roadside, gas station limbo and in true Hinds traditon it fizzes with energy and a damn good time. The band themselves explain the track’s creation; “‘British Mind’ is a song that has been born, fed, recorded, mixed, and mastered during this summer in between festivals. The title and its phrase comes from an idea that has been chasing me every time the sun is used as a metaphor of happiness in so so many songs made by English people. The sun is “that something” you have to look for, to wait for, to trust that it’ll come back someday, and will take care of you again. So, as Spaniards, a sunny day for us is simply a must. We just count on it. It’s gonna happen. For sure. Actually, the song was written on hot, sunny days. Could you tell? Anyways, it is still not the beginning of a third album, it is more like an epilogue for I Don’t Run.” I Don’t Run was released on April 6 via Lucky Number and showcased a bigger, better, faster, funnier, more dexterous Hinds. Co-produced by Hinds and Gordon Raphael (The Strokes, Regina Spektor), and engineered by Shawn Everett (Alabama Shakes, The War On Drugs, John Legend), the product of a band fighting for their place, who play hard but work even harder. Buy or Stream it now HERE. You can catch the band on tour throughout the rest of 2018 at the dates below. Their mini festival “Party Planet” will be a one day celebration of all things Hinds and they’ve hand-picked a line up which already includes Girl Ray, Sports Team and SHOPPING. As always it is best described in their own words; “Party Planet is something we’ve been wanting to do even before having the band. We think that festivals are one of the best inventions in this world, and that friends meeting with the reason of music to have fun is awesome. so, LADIES AND GENTLEMEN. PARTY PLANET. WE CREATED A FESTIVAL. ALL DAYER. BEST DAY OF YOUR LIFE. AND MINE TOO. HINDS ARE HEADLINING. THIS IS THE BEGINNING OF A NEW ERA. FORGET EVERYTHING YOU LEARNT. #PARTYPLANET IS #HINDSASFUCK.” Watch this space for more announcements. UK Tour dates 16/11 Liverpool, UK Arts Club 17/11 Birmingham, UK The Mill 19/11 Oxford, UK The Bullingdon Arms 20/11 Cambridge, UK The Junction 21/11 Southampton, UK Engine Rooms 23/11 Tunbridge Wells, UK The Forum 24/11 Leicester, UK Dryden Street Social 25/11 Nottingham, UK Rescue Rooms 27/11 Hull, UK Fruit 28/11 Edinburgh, UK The Caves 29/11 Leeds, UK The Church 01/12 London, UK EartH / Hackney Arts Centre 03/12 Sheffield, UK The Leadmill 04/12 Newcastle, UK Riverside