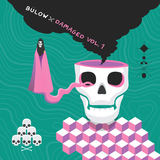 Not A Love Song

Artist: bülow Track: Not A Love Song Impact Date: 23rd March 2018 Label: Polydor Records UK Socials: Instagram / Twitter / Facebook EP Name: Damaged Vol. 1 PR: bülow – ‘Not A Love Song’ Debut EP – ‘Damaged Vol.1’ – available now "Megan Bülow is a 17-year-old from the Netherlands and she also happens to, maybe, be a pop genius” Noisey "Brilliant...the buzz about bülow grows louder" Sunday Times, Breaking Act “Super-smart…beautifully crafted” NME, Ones to Watch for 2018 "bülow's songwriting is immediate and strikingly honest, mixing modern hip-hop, electronic, and R&B elements with clean production and catchy pop songwriting that requires no more than one listen to get hooked." Pigeons & Planes "Making some of the freshest and most exciting pop out" Hilly Dilly ‘Not A Love Song’ is the stunningly confident debut track from bülow. Rapidly approaching 6 million streams on Spotify alone – where it’s also made their Global Viral Chart – bülow will make her debut live appearances in her home of The Netherlands next month, headlining Paard in Utrecht on February 14th and then playing the DiCE festival on February 17th. Few voices can stop you in your tracks, prickling hairs on the back of your neck, and transporting you at first listen. At the age of only 17, bülow has crafted a powerful debut “Damaged Vol. 1” full of sweet and effortless melodies which do just that. A child of the globe, the bright-eyed Megan Bülow has grown up in 5 countries including Canada, Germany, the UK, the US, and is now finishing high-school in The Netherlands. Discovered at a summer camp in 2016, Megan quickly found a kinship with some of Canada’s hottest young writers and producers, including Lowell, Nate J, Mike Wise, Kevin Figs, and more. With opportunity at her fingertips, bülow has risen to the occasion, creating an astounding body of work in her three song debut “Damaged Vol. 1”. Sentimental, playful, and haunting, the tracks “Like This Guy” “Lines” and “Not A Love Song” are an impressive flag-bearer for this unique artist’s promising career.