Back to Rat Boy's Music <
EP 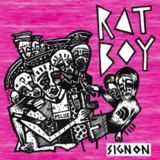 Artist Name: Rat Boy Track Name: 'Sign On' Release Date: 1st June 2015 Label: Hometown EP Name: Sign On EP Release Date: 1st June 2015 After building an underground following with his self-released debut EP ‘The Mixtape’ and touring as guest to Circa Waves, Rat Boy – AKA teenage producer / writer / multi-instrumentalist Jordan Cardy – will release his debut single ‘Sign On’ which impacts on June 1st, via Hometown Records. Available to purchase here: ‘Sign On’ is a state-of-the-nation anthem for those who have also experienced similar tales of lost jobs, empty bank accounts and being “young, dumb and living off mum.” Sonically, ‘Sign On’ is contrastingly uplifting as it mixes an anarchic sense of melody with ramshackle beats and Rat Boy’s character-fuelled raps. For this track, Rat Boy called on the assistance of Gorillaz producer James Dring. The single’s artwork is by Rat Boy himself, inspired by the likes of skateboarding artist Mark Gonzales and Snoop Dogg associate Darryl “Joe Cool” Daniels. The single is indicative of Rat Boy’s style, in which his home-grown rhymes paint a lyrical dissertation of suburban Britain. The Chelmsford resident observes the society around him and encapsulates his environment in songs which flow with wit and caustic disparagement. He’s firmly within the storytelling lineage of Britain’s great lyricists who represent some of his greatest influences: Ian Dury, The Clash, Squeeze, Blur and The Streets. After leaving school and being fired from his job in Wetherspoons (“I gave someone a raw burger and they ate it”), Rat Boy found solace in music and taught himself Logic on his mum’s computer. The result was ‘The Mixtape’ which distilled his small-town tales into three minute mash-ups of hip-hop and indie topped with his half-rapped, half-hollered Essex vocal tones. Rat Boy performs almost everything – vocals, bass, keys and production – throughout its five riotous tracks. Following the tour support with Circa Waves, Rat Boy can be seen live at the following dates: 1st May Club NME, Koko, London 2nd May Live at Leeds, Leeds 3rd May Sunday Live, Stockon On Tees 15th May The Great Escape, Brighton 27th May Dublin Castle (Headline), London 12th July Brownstock Festival, Essex 29th & 30th August Reading and Leeds Festival 13th Sept Bestival