TUNE Boniface - It's A Joke 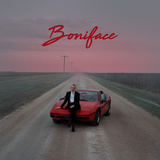 Boniface is very pleased to share the video for soaring debut album standout, ‘It’s A Joke’.

The visuals were shot in Toronto, just one day before lockdown commenced in Canada.

“It’s weird to think about now,” Micah Visser remembers fondly. ‘But I’m glad it’s the last thing we got to do. Basically, we just wanted to have fun with this one. And we did!” The energy was so positive on set and I think the playful nature of the song really comes through in the video,” Micah says of the recording. ‘We also finally got to pay homage to ABBA in a Boniface video, which I’ve wanted to do from the start.’

The video finds Boniface adopting Adam Ant-esque styling, and it’s an entirely fitting attire for a track that perfectly celebrates the sheer strength of their soaring pop synths.
Boniface is currently spending the extended quarantine period to continue writing, and taking full advantage of the respite to utilise a newly built home studio. "Between bouts of anxiety,” Boniface recently told Canada’s Exclaim! Magazine, ‘I've been really putting it through its paces, writing and recording a lot of new music’.

Micah and the band were due to bring the debut album to the UK in May; including a run of Summer festivals, and a fast-selling headline date at London’s Omeara. News of show rescheduling will be announced in due course.

Boniface’s self-titled debut album was released earlier this year to critical acclaim, and amongst dates on both sides of the Atlantic with the likes of Foals, Circa Waves, Let’s Eat Grandma, Sundara Karma and White Lies.

“Like the best of early 2000s emo or, hell, Taylor Swift’s 1989, Boniface is fully immersed, imparting a present-tense urgency on songs about learning how all those super-charged emotions fit together with the (melo)drama of self-discovery.”  - Paste Magazine

Boniface’s eponymous first LP is all at once a collection of shimmering synth-pop masterpieces and soul-shaking ballads.  - Best Fit

“Boniface's debut album is a complex, deeply personal pop masterpiece… What Lana Del Rey did last year for the 1970s singer-songwriter genre on Norman Fucking Rockwell, Boniface has managed to do for 1980s pop on this stunning, multifaceted debut album: embrace a genre while effortlessly elevating it.”  - Pop Matters

Much like their labemate [SOPHIE], Boniface effortlessly glides between the euphoric and the wounded, often presenting both simultaneously  - DIY