TUNE Paper Aeroplanes - Time to Be 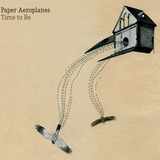 After a busy summer of festivals, Welsh duo Paper Aeroplanes have announced the release of a new 6 track EP ‘Time To Be’, which coincides with an extensive UK tour. The EP will be available to buy directly from the band at any of their UK shows, before its official release on 26th November. If you can’t wait that long, they are also offering a free download of the title track ‘Time to Be’ via SoundCloud: http://soundcloud.com/paper-aeroplanes/time-to-be

Paper Aeroplanes are Richard Llewellyn and Sarah Howells – a highflying folk/pop duo who are inspired by their small West Walian town origins.

The duo have toured heavily throughout 2012, playing their own headline tour, a support slot on the Ellen and the Escapades tour, and festivals such as Hay Festival and the Isle of White Festival. Following on from this, they are embarking on a much larger UK regional tour, at some of the UK’s finest acoustic venues. The band has also been busy in the studio this summer, recording their new album with sound engineer Phill Brown (Talk Talk, Bob Marley, Laura Marling), which is due for release in Spring 2013.