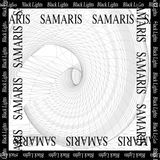 Samaris are to release the title track from their forthcoming ‘Black Lights’ album as a single on 10th June. Written and recorded over the past year in Berlin, Reykjavik and Ireland, ‘Black Lights’ is the Icelandic trio’s most fully realised and accessible album yet - sung for the first time entirely in English, headed up by it’s gorgeous lead single ‘Wanted 2 Say’.

Says Doddi of the new single: “This one was written by me and Slugs (Áslaug) in Hljóðriti, the chords are a sample of the clarinet and the arpeggiator is a sample of Jófríður’s voice. I remember we were really quick coming up with it. The demo was called ‘Nofríður’ because she wasn’t there and one of the sounds in it is me singing in a vocoder. Me and Jófríður went to Ireland and recorded a demo of the vocals the final vocal take recorded in London. The original was 15 minutes long, we could listen to the loop for hours so the arrangement was quite tricky, we had to leave a bunch of sounds and melodies out…”

The band have just announced UK and European dates for June with a London date at The Bussey Building in Peckham on Wednesday 13th July and the penultimate spot at Latitude Festival’s Lake Stage on Saturday 16th July.


‘Black Lights’ is a reflection on both the expanded horizons afforded by a year of experiences on the road following the release of 2014’s ‘Silkidrangar’, and of a period of change and not a little emotional turmoil for all three band members.

The way the new album came together reflects the changing personal circumstances of the group over the last year. All are now based in separate cities: Þórður Kári Steinþórsson (aka Doddi - programming) relocating to Berlin to take part in the city’s burgeoning techno scene, Áslaug Rún Magnúsdóttir (clarinet) to The Hague to study a specialised Sonology course and Jófríður Ákadóttir (voice) footloose, traveling to experience new places and the musical cultures within them.