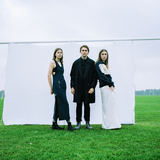 “Few things elicit such visceral reactions from us” 8.5/10 The Line of Best Fit
“The lack of a common language doesn’t stop you getting swept up in the band’s strangely sensual world.” NME
“Silkidrangar transcends language and symbolism, casting a spell on the listener” The Ground
“A stunning record in its own right” 8/10 Drowned In Sound
“[Samaris are] on the verge of something great” Figure8
“An entirely other-worldly experience…quite possibly one of the strongest albums this year” ******So So Gay
“An excellent forward thinking record’ 8/10 Loud &Quiet
“Phenomenal” Bearded
“Ethereal” Nowness

Samaris are set to release a new single ‘Brennur stjarna’ from their ‘Silkidrangar’ album on 28th July. Following UK and Irish dates with John Grant in March, the band played two Great Escape shows in early May before returning to the capital for a sold out Birthdays show. Their summer schedule includes appearances at Roskilde, Green Man, Longitude and All Tomorrow’s Parties (more tbc):


Combining disparate elements of electronics (Þórður Kári Steinþórsson, aka ‘Doddi’), clarinet (Áslaug Rún Magnúsdóttir) and Jófríður Ákadóttir’s enchanting voice, Samaris mix glacial electronica and pulse-like beats with haunting chanted vocals - the lyrics culled from nineteenth century Icelandic poems. “You could say the words have been delicately sewn together and in a way they already have their song, their own melody when you read them” suggests Áslaug. The overall effect is simultaneously ancient and modern – a sensual sound filled with dark spaces and alien atmosphere.

Within months of forming in Reykjavik in 2011, Samaris had won both the Icelandic Músíktilraunir and Kraumur Award, before the international release last summer of their two Icelandic EPs as the eponymous ‘Samaris’ further expanded horizons. “We want people to experience something they haven’t experienced before,” they told a curious Dazed & Confused while glowing reviews of the album appeared everywhere from the NME to the FT. Very quickly the original aspiration of “just wearing funny costumes and thinking maybe we could get a gig in a bar in Reykjavik” seemed distant as Samaris moved into the international scene playing European festivals like Sonar, Berlin Music Week, Electric Picnic and a sold out JaJaJa show in London. The Line of Best Fit nominated them the No.1 act to see at Airwaves 2013, to which Samaris will return again this year.