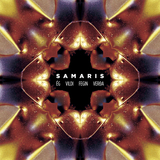 
Combining disparate elements of electronics (Þórður Kári Steinþórsson, aka ‘Doddi’), clarinet (Áslaug Rún Magnúsdóttir) and Jófríður Ákadóttir’s enchanting voice, Samaris mix glacial electronica and bold, percussive beats with haunting chant-like vocals - the lyrics culled from nineteenth century Icelandic poems. “You could say the words have been delicately sewn together and in a way they already have their song, their own melody when you read them” suggests Áslaug. The overall effect is simultaneously ancient and modern – an ethereal sound filled with dark spaces and alien atmosphere.

Samaris release a brand new single ‘Ég vildi fegin verða’ – the first taster from their forthcoming ‘Silkidrangar’ debut album – via One Little Indian on 28th April. The album follows on May 5th.

All of a sudden, the original aspiration of “just wearing funny costumes and thinking maybe we could get a gig in a bar in Reykjavik” was a distant memory as Samaris moved into the international scene playing European festivals like Sonar, Berlin Music Week, Electric Picnic and a sold out JaJaJa show in London. The Line Of Best Fit nominated them the No.1 act to see at Airwaves 2013

In September, following a show supporting Jon Hopkins in Manchester the band effectively went on hiatus when clarinettist Áslaug departed on a long planned round-the-world trip, the three regrouping in Australia in the New Year to perform at the Spiegeltent on the 16th & 17th January, part of the Sydney Festival, and their first shows together in four months. Following these dates down under, the trio play European shows in February & March before returning to tour the UK in May.
Formed in 2011 in Reykjavik, within months Samaris had won both the Icelandic Músíktilraunir (past winners include the likes of Of Monsters and Men) and Kraumur Award. The groups’ performance at Iceland Airwaves in 2012, attracted the attention of Line Of Best Fit, Drowned In Sound and One Little Indian amongst many others. Singer Jófríður also performs with her sister Ásthildur in the more folk-inclined Pascal Pinion