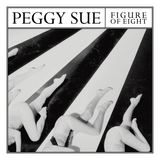 Artist: Peggy Sue Title: Figure Of Eight Label: Wichita Recordings Release Date: 14th April 2014 "The delicate tools that are Slade, Young and drummer Olly Joyce continue to punch well above their weight" - **** Mojo " A dark & distinct third album" - **** Time Out "Beautiful" - 7/10, Uncut "The band's finest to date" - Loud & Quiet "Those harmonies remain as irresistible as ever" - The Line of Best Fit “Peggy Sue’s 3rd LP impresses throughout, a record of soulful depths & heady, emotional highs” – 8/10, NME “Their most confident album yet” – Grazia Having just returned from a successful US tour, Peggy Sue are pleased to announce that the next single to be taken from their highly acclaimed third album Choir of Echoes will be ‘Figure of Eight’, which is set for release on April 14th. Peggy Sue are set to embark on a full UK tour in April following the recent US stint and have also just been announced for the End of the Road festival line up. In the words of the band, ‘Figure of Eight’ is “the exception to most of our rules. It was written almost entirely in practices by the whole band and it is about as upbeat as a Peggy Sue song gets. It appears in my head as a sort of balancing act where each of the four instrumental parts is holding up the rest. Some kind of musical Escher diagram. “It is about indecision and friendship and the danger of keeping your options open for too long.” Since releasing their album, it’s safe to say that Peggy Sue have kept themselves busy. Whilst touring across North America, ‘The Shape We Made’, a track taken from their debut album (Fossils and Other Phantoms), was featured in the third episode of the new House of Cards series, which just aired on Netflix. As well as this, the band also made a swanky new video for their previous single ‘Longest Day of The Year Blues’, which can be seen here. “Choir of Echoes is an album about singing. About losing your voice and finding it again” they explain. “Voices keeping each other company and voices competing for space. The call and response of the kindest and the cruelest words. Choruses. Duets. Whispers and shouts." If you’ve ever wondered “Peggy Who?”, then here’s your answer. The past two years have allowed the band time to experience a vast array of new sights and sounds, which have translated wonderfully into their new work. Choir of Echoes sees Peggy Sue come back around on their best form to date, and provides an emotional venture into a realm of sensibility that this band have to offer. See Peggy Sue live: 7th April - Brighton, Green Door Store * 8th April - Coventry, The Tin 9th April - Manchester, Soup Kitchen * 10th April - Glasgow, Broadcast * 11th April - Liverpool, Leaf * 12th April - Sheffield, The Harley * 14th April - Bristol, The Old Bookshop * - SOLD OUT 15th April - London, Oslo 29th – 31st August – End of the Road Festival, Dorset * - with support from Eyes & No Eyes.