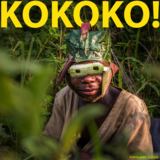 Title: Tokoliana Label: ICI Impact Date: 25th August 2017 KOKOKO! is an explosive new band with an alternative sound crafted in Kinshasa, DRC. Made up of local artists, instrument inventors and prolific French producer Débruit. The project came about when production company La Belle Kinoise (Staff Benda Bilili, Jupiter’s Dance), invited Débruit to Kinshasa for a month long residency in 2016, to collaborate with the innovative artists they were documenting across the emerging contemporary art scene. After building a recording studio together out of mattresses, bits of wood and a ping pong table, the Congolese musicians and the itinerant Breton producer began exploring each other’s ideas, sounds and cultural influences. By the end of a month of working intensely in their new studio, exploring Kinshasa by night, and sleeping whenever there was a spare moment, they had the bones of a debut album and KOKOKO! was born. Since the launch of the first video, KOKOKO! have gone viral, with nearly 2 million views of this 3 minute introduction film and their recent sold out debut European tour, KOKOKO! has captured the imagination and attention of many. And now they present their debut 2 track EP of Electronic Congolese psychedelic post punk. Lead track Tokoliana means “We are devouring each other” in Lingala; a clear reference to the daily struggle and corporate greed that has engulfed the country. Wrapped in Débruit’s trademark production, this strong message is given a warm, punk-funk feel, reflecting the optimism of the people. L.O.V.E. is a track that features Rachel Nyangombe on vocals, a long standing figure in the Kinshasa music scene. Strange mechanical sounds emanate from the imaginative DIY instruments; the kick is the sound of Love Lokombe’s thumb against a cable, and the many different layers are created from tomato cans for the clap, audio jack cable interference, 2 string guitars, and a talk-box made from a car stereo cassette. L.O.V.E. is a testament to the Diy craftsmanship of these musicians... MUSICIANS FEATURED ON THIS RELEASE TOKOLIANA Love Lokombe, Dicap Mayele, Boms Bomolo, Dido Weke, Paul Shemisi, Lebrun Kitenge, Strombo Kayumba Débruit (Xavier THOMAS) L.O.V.E. Rachel Nyangombe, Love Lokombe, Viko Mupasa Tengwa Débruit (Xavier THOMAS) “KOKOKO! is an explosive new musical collective that thrives on ingenuity” TIME mag “Get to know the soundtrack of Kinshasa's tomorrow, a powerful protest project...KOKOKO!” i-D mag “Survival fuels creativity” says one of the members of KOKOKO!, an Electro-Junk band but they call their sound “tekno kintueni” or “zagué” in Lingala. Their music might emanate from found objects made into electronic instruments” Afripop Mag