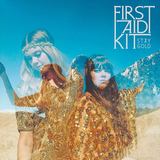 Artist: First Aid Kit Title: My Silver Lining Label: Columbia Records Release Date: 2nd June 2014 On 9 June 2014, Swedish duo First Aid Kit will make their Columbia Records debut with their third album Stay Gold. Having had its UK premiere via Lauren Laverne yesterday, the first single ‘My Silver Lining’ is now available for streaming via Pitchfork pitchfork.com/news/54560-first-a…e-my-silver-lining The band has also announced UK festival dates at Latitude and Green Man Festivals. More UK dates will be announced imminently. With Stay Gold, First Aid Kit - sisters Klara and Johanna Söderberg – have honed their musical skills and blossomed as vivid storytellers in creating an ambitious 10-song collection. Recorded at ARC studios in Omaha and produced by Mike Mogis (Bright Eyes, Monsters of Folk), the duo also enlisted The Omaha Symphony Orchestra to play on the record, with arrangements by Nate Walcott (Bright Eyes, Broken Bells, Rilo Kiley). They say of the recording process, “We took new directions and turns with the arrangements, building them up and creating more dynamics, yet always following where the songs wanted to go.” Watch: Exclusive album trailer, filmed on location in Death Valley (directed by Neil Krug): youtu.be/KA4Re2zrTHQ Drawing inspiration from sources such as Townes van Zandt’s Our Mother The Mountain and Lee Hazlewood productions, ‘My Silver Lining’ features the duo’s most sophisticated songwriting to date. They explain, “It's song about searching for a reason to keep on keeping on, to find the good that comes with the bad. We wanted to create a piece that was dark yet uplifting at the same time.” Hailing from a southern suburb of Stockholm, Klara and Johanna began composing songs as teenagers in 2007. Their heart-wrenching song ‘Emmylou’ from The Lion’s Roar was chosen by Rolling Stone as a ‘Single of the Year’ in 2012. That year was an astonishing breakthrough that saw worldwide sales of over 250,000 and saw the album gain silver status in the UK with sales of 68K. They have performed on The Late Show with David Letterman, Conan, shared the stage with artists including Jack White, Lykke Li, and Bright Eyes, played the main stage at Glastonbury and rounded everything out by winning both the Nordic Music Prize and four Swedish Grammy’s in 2013. On Tuesday 1 April, Stay Gold will be available for iTunes pre-order, orders will come with a free download of ‘My Silver Lining.’ Deluxe collector’s editions will also be available for pre-order at thisisfirstaidkit.com, featuring limited edition gold vinyl, an exclusive tote bag, and an autographed 14x20 lithograph while supplies last. Stay Gold Tracklist: 1. My Silver Lining 2. Master Pretender 3. Stay Gold 4. Cedar Lane 5. Shattered & Hollow 6. The Bell 7. Waitress Song 8. Fleeting One 9. Heaven Knows 10. A Long Time Ago Festival dates: 19 July Latitude Festival www.latitudefestival.com 17 August Green Man Festival www.greenman.net Praise for The Lion’s Roar – ‘Album of the Week’ Independent on Sunday “A brilliant album from sisters Klara and Johanna Soderberg” 5/5 Sunday Telegraph “An intoxicating mix of widescreen Americana and Scandinavian poise” 4.5/5 The Sun “The voices of Johanna and Klara are enough to weaken knees... The lyrics’ heavy-hearted take on relationships is more evidence of an astonishing maturity” 4/5 Mojo “Klara and Johanna Söderberg have crafted remarkably mature work” 4/5 Uncut “It’s pretty perfect” 8/10 NME “Nothing short of magical” 4/5 The Fly “The second album from the Swedish Soderberg sisters is full to the brim with charm” 4/5 The Guardian “A country-rock revelation” 4/5 The Independent “There’s genuine beauty here” 4/5 Evening Standard “Their truly sublime sibling harmonies are still the shining beacon they always were” 4/5 The List “The Lion’s Roar is full of rich textures that unfurl around Klara and Johanna’s bittersweet harmonies... First Aid Kit have woven their Swedish sangfroid into a bewitching brand of Americana” 8/10 Clash “4/5” Q “4/5” The Times “4/5” Daily Mirror “8/10” Loud & Quiet