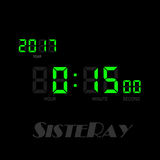 “...the band radiate the sense of Men on a Mission who engage both with their audience and the wider world beyond Camden”
Tom Robinson, BBC 6 Music

Sisteray are a four-piece band from Walthamstow currently causing a buzz and re-writing the indie guitar rule book.

The band’s new recording project entitled ’15 Minutes’, released 14th April on Vallance Records, takes its inspiration from the famous Andy Warhol quote, "In the future, everyone will be world-famous for 15 minutes".

Since their formation in 2014, Sisteray have been bringing their punk ethos to sold out venues up and down the country, performing pop-up guerrilla gigs, organising their own club night ‘Welcome to the Monkey House’ where they book the bands, promote the gig and often DJ, and have played roof raising sets at Camden Rocks and the Isle of Wight and Leeds festivals.

Coming together through their shared love for bands such as The Smiths, The Clash, The Kinks and The Buzzcocks, Sisteray also reflect more contemporary influences including Slaves and Sleaford Mods.

Upbeat melodies and observations of 21st century Britain show a band not afraid to voice their disaffection towards the establishment and political elite, so much so, that guitarist Dan Connolly was asked to appear on BBC News and ITV along with The Independent, to voice his views on the recent Syria debate. Sisteray were also recently invited to perform at the 40th Anniversary of Rock Against Racism.

With a strong message of unity and anti-establishment hints, songs like ’15 Minutes’ opener ‘Queen’s English’ and the ebullient ‘Nostalgia Trip’ are rousing guitar anthems with a political message, proving that Sisteray are the full package.

Available digitally and on vinyl only, Connolly adds, 'Now more than ever, people seem to be given 15 minutes and 15 minutes only. It's not an album and it’s not a single. It's simply a statement about the times we are living in.’