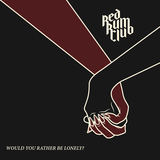 Would You Rather Be Lonely?

Artist : Red Rum Club Single : Would You Rather Be Lonely? Label : Modern Sky UK Impact Date : January 11th 2019 Taken from : Debut album MATADOR out Jan 11th 2019 RED RUM CLUB  ‘WOULD YOU RATHER BE LONELY’ TAKEN FROM DEBUT ALBUM ‘MATADOR’ OUT 11th JANUARY 2019  “Bridging the gap between colloquial indie rock and cinematic soundscape… fresh, frenetic”  – Louder Than War After the fantastic reaction to debut single ‘Honey’, Red Rum Club are hot on its heels with new single ‘Would You Rather Be Lonely’ ahead of the release of their debut album ‘Matador’ via Modern Sky UK on 10th January 2019. The band have just completed a substantial headline tour of the UK bringing their blistering anthems to packed out crowds all over the country. ‘Would You Rather Be Lonely’ is a real highlight of their live set, with it’s clearly identifiable lyrics and anthemic chorus, it has proved to be a stand-out track and the band have been eager to share it with the world.  Propagators of rousing rock’n’roll that oozes with a low-slung outlaw attitude, Red Rum Club are a striking new sextet from Liverpool. Forming in 2016, the six-piece have been biding their time, pedantically collecting melody by melody, lyric by lyric, the songs of their epically envisioned forthcoming debut album. With a strong sense of camaraderie and a remarkable DIY work ethic, Red Rum Club have toured the UK extensively, learning the ropes of booking, managing, recording, and of course performing duties entirely independently as they slowly edged towards their dreams of a releasing their debut album. 100% Grassroots, authentic and with a sound and vision defined completely on their terms, Red Rum Club are completely the real deal and needless to say adoring fans haven’t be hard to come-by. With their frenetic live shows and now-notorious guerrilla gigs in the North-West quickly becoming the stuff of local legend (just check out the band’s roof-top performance of ‘Calexico’ and ‘Angeline’ for Signature Live), RRC have already amassed a loyal fan-base in their native Liverpool and across the wider nation. Most recently, a performance at BBC Introducing on Sentric’s Bandstand Stage at BBC Introducing Live lead to a live session on Steve Lamacq’s 6Music show where the band were able to discuss the exciting scene in Liverpool that surrounds them. A sense of friendly competition with the other bands has given local artists the ambition and drive to push themselves and Red Rum Club are the flagsmen of this drive.  Winning over countless fans this year with tent-tipping sets at Y-Not, Truck Fest, Sound City and Isle Of Wight Festivals, RRC’s jubilant summer was capped-off with their winning of the prestigious Pirate Prodigies UK industry prize for ‘Best Emerging Band’. A benchmark year indeed, it seems the time is surely now for Red Rum Club to open doors of the Club up to the wider world in too.  Red Rum Club also embarked on a string of UK shows throughout October and November including a richly deserved headline slot at the capacious O2 Academy in Liverpool on Saturday 29th September, where they offered a sell out crowd plenty to sink their teeth into as they head towards that all important debut album release in January on Modern Sky UK. Red Rum Club are:  Fran Doran // Tom Williams // Michael McDermott // Simon Hepworth // Neil Lawson // Joe Corby    RED RUM CLUB  WILL RELEASE THEIR DEBUT ALBUM ‘MATADOR’ VIA MODERN SKY UK – 11 JANUARY 2019     FOR MORE INFORMATION https://twitter.com/redrumclub  https://www.facebook.com/RedRumClubBand/  https://modernsky.uk    Contact : RHYS BRADLEY - MARTIAN PR - promo@martianpr.com / www.martianpr.com