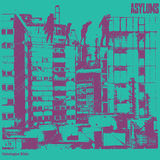 Artist : ASYLUMS Single : Catalogue Kids Label : Cool Thing Records Impact Date : March 13th 2019 ISRC code : UKAB62000001 Cat No: CTHING46 ASYLUMS “Catalogue Kids” Thundering full-throttle from supporting Iggy Pop, sell-out European shows, the Southend-On-Sea quartet reveal the first single to be lifted from their forthcoming 3rd studio album, recorded by Steve Albini (Nirvana, PJ Harvey, Pixies) in Chicago. The first track is titled ‘Catalogue Kids’ and will be available on DSPs from Friday Jan 31st via Cool Thing Records. The last 12 months has been a busy period for Asylums, splitting their time between Chicago, whose big honest soul superseded the garish horrifying pantomime of Trump’s America, and Norway and Germany, where Brexit shame was temporarily suppressed like a bad nightmare. Asylums are the ground-stomping stallion of the stable that is Cool Thing Records, a creative collective of relentless DIY happen-makers based in Southend, a seaside town with an illustrious musical history of working class trouble-makers and dreamers. Now back on the floundering isle of chaos that is home, nails bloody from picking the real from the farce and bursting at the guts with tales of runaway adventures, magpie wisdom and furious hope, Asylums have big new things to say. After 2019’s golden time of working with some of the greats - at close quarters with iconic showman Iggy Pop, and in the privacy of a world-class studio with legendary recording engineer and sound alchemist Steve Albini (In Utero by Nirvana, Rid Of Me by PJ Harvey, Surfa Rosa by Pixies; too many stone cold legends to parenthesise) - Asylums are uniquely primed for their next leap ahead. And as recent recipients of the prestigiously hard-to-score PRS Momentum Fund, the leap seems gilded, greased, and good-to-go. Originally described as “Blur if they were raised in Seattle" or “the excitement you felt when you first heard Buzzcocks or Manics”, the development of Asylums has added further anger and experimentalism to their musical mood swings. Moving on from the neon ride of first album ‘Killer Brain Waves’ and the bold exploration that was ‘Alien Human Emotions’, ‘Genetic Cabaret’ is a seething tandem of beauty and ire. To theme it is to expect a riot to keep within the lines, but look forward to political puzzling from protesting hearts, a pop punk pop at the establishment, a demand for something else. This is a band of brothers who have realised they are not boys anymore, gone are the days of kicking stones about their seaside town. Asylums have learned how to articulate their hearts and weaponise their conscience. The prelude to procreation brings a new vital urgency to their work. These are the times to demand more, not just for yourself, but for the future. Plugging in to the universal WTF, and still frothing with the fire that makes their live gigs feel like a javelin attack of lightning-bolt joy and rollicking effervescence, Asylums aren’t staring into the abyss, they’re lighting torches. They’re passing them round. They’re telling us to go with them; angry, curious, purposeful, hopeful. Social Media : https://www.facebook.com/asylumsuk/ https://twitter.com/Asylumsband For more info contact - RHYS B at MARTIAN PR - promo@martianpr.com