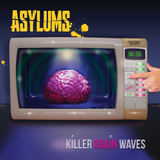 ASYLUMS ANNOUNCE NEW DOUBLE 'A' SIDE SINGLE RELEASE AHEAD OF DEBUT ALBUM ‘KILLER BRAIN WAVES’ out on JULY 29th via COOL THING RECORDS! Double A side single tracklisting info… A. I’ve Seen Your Face In A Music Magazine (2m 21s) AA. Second Class Sex (2m 08s) Release/Focus Date: 29th July 2016 | Label: Cool Thing Records With April ‘16 seeing ASYLUMS featured as Annie Mac’s “New Names’ on BBC Radio 1, huge support from Steve Lamacq at 6 Music, Huw Stephens at BBC Radio 1 + an upcoming XPOSURE live album launch show at The Lexington for John Kennedy on July 28th, ASYLUMS hit us with their long awaited debut album KILLER BRAIN WAVES! So now we’ve seen Asylums in a music magazine or lots of music magazines to be precise. They’ve also been all over the radio and thankfully the television’s not completely dead, because they’ve been all over that too! When “I’ve Seen Your Face In A Music Magazine” came out first time around the band didn’t even have any social media, let alone their faces in a magazine. Eighteen months later and it’s turned into a self-fulfilling prophecy, so they thought it was only fair to give one of their personal favourites a much-deserved second bite of the cherry. Of course, the plastic pop stars with the cheekbones and the cheque books are still there, but Asylums have still got the tunes and are fast approaching. But not to be stingy, there’s a brand new track from Asylums on offer here too in the form of “Second Class Sex”. Gender equality and respect are the key messages here, something the band live and breath by. They simply don’t do small talk, austerity or materialism. They and this track do however, rock! “Second Class Sex” echoes the likes of Sonic Youth, Blur and At The Drive-In whilst nodding to contemporaries such as TRAAMS and Metz. Over the last two years their unique cut of post hardcore has transformed the band from social media blackouts to being one of Annie Mac’s ‘New Names’ on BBC Radio 1. Over that time period, home demos migrated into forming a fully fledged band which could rip up any live stage. It wasn’t long before Asylums were playing shows with the likes of The Vaseline’s and Black Honey, whilst getting invited to play festivals such as the The Great Escape and Bestival. The NME premiered their last single “Necessary Appliances” and they’ve riffed hard enough to gain Radio X live sessions, 6 Music love galore and even a No.1 in the Dutch alternative charts. So where’s the album we hear you scream? Here’s your album! “Killer Brain Waves” is a Sarcastic, energetic, angry, manic, catchy and fun debut album which is released on July 29th. Like all previous Asylums material it’s released on the band very own Cool Thing Records, which is quickly establishing itself as force to be reckoned with. Rumour has it they will start releasing other new bands on their label as soon as next year! Have you stopped for a breath yet? When does this all slow down? It’s doesn’t. In the world of Asylums it’s just started. LIVE DATES 9th July - Village Green Festival 10th July - Brownstock 24th July - Tramlines Festival 28th July - The Lexington, London 19th August - Sub89, Reading 8th September - Bestival ASYLUMS ONLINE Website www.asylumsband.com | Twitter www.twitter.com/asylumsband Facebook www.facebook.com/asylumsuk PRESS FROM PREVIOUS SINGLES NME ‘Like being caught between a hammer and an anvil’ Q Magazine ‘Costal indie fuzz merchants’ Rock Sound Magazine ‘Like the scratchiest bits of Blur if they were grungers filled with energy. Intriguing right?’ Line Of Best Fit ‘They are a DIY band, but not as you know it. Somewhere between a forceful wave of 90’s pop punk and Britpop, they’re entirely eccentric and entertaining’ BBC ‘Remember the last time we heard of a great band from Southend-on- Sea – The Horrors? Well Asylums are just as good, but a whole load more colorful’ Clash Magazine  ‘Frenetic post-hardcore with a pop edge’ FOR FURTHER INFORMATION RHYS BRADLEY @ MARTIAN PR - promo@martianpr.com /