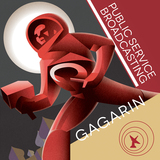 Public Service Broadcasting are pleased to unveil the first single from their upcoming second album, The Race For Space. A brassy, funk-heavy superhero theme song for the most famous man in the world at the time, ‘Gagarin’ (16 February 2015) reveals a new side to the band – not least their considerable dancing skills.

Once again given access to newly acquired BFI footage, this time of the Soviet space race, PSB’s J. Willgoose, Esq. explained the rationale behind the song: “We didn’t want to be too literal in our interpretation of the material we were given – material that was full of heroic language and a sense of exuberance, with lines like ‘the hero who blazed the trail to the stars’, and ‘the whole world knew him and loved him’. It seemed more appropriate to try and re-create some of that triumphant air with a similarly upbeat song – and when it came to creating the video, the best way we could think of to communicate that sense of joy was to get our dancing shoes on.”

With both a 6-piece brass section and 5-piece string section in tow, ‘Gagarin’ also signals a broadening of Public Service Broadcasting’s sound, making it a somewhat surprising return for this apparently reserved British duo. “We wanted to surprise people, and show that there is a depth and breadth to our musical interests and influences that goes far beyond our first album”, Willgoose continues, referencing the group’s Top 30 debut LP Inform – Educate – Entertain, released in May 2013.

‘Gagarin’ is the first single from the new album, and will be available as a free download for anyone who pre-orders a copy of The Race For Space via the band's website: http://publicservicebroadcasting.net

Watch the video for ‘Gagarin’ via NPR here
“Trust me, this is the best thing you’ll watch all day” NPR

The band will play two launch shows at the National Space Centre, Leicester, in the week of album release – both of which sold out in under 24 hours – before heading around the world on an extensive tour. In the UK, they will blast off at Brighton's Corn Exchange on 22 April before splashing down for a huge show at London's Roundhouse on 7 May.