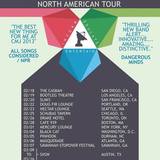 Special North American release PUBLIC SERVICE BROADCASTING UNVEIL NEW VIDEO FOR "EVEREST" NORTH AMERICAN TOUR KICKS OFF NEXT WEEK - INCLUDES SXSW Debut Album Inform - Educate - Entertain - 9th In BBC 6 Music's "Albums Of 2013" As many parts of the US remain frozen and blizzard-hit, Public Service Broadcasting release their own snow-packed video for their hit UK single 'EVEREST' which premiered via FILTER earlier today. WATCH "Everest" (embed code below): Public Service Broadcasting - Everest (1924 Expedition) The narrative is (very!) loosely based on the 1924 expedition to Everest where George Mallory and Andrew Irvine lost their lives, reportedly very close to the summit. Speculation as to whether they reached the top continues. Public Service Broadcasting is London-based J. Willgoose, Esq. and his drumming companion, Wrigglesworth. The duo set off on their own mission this weekend as their first North American tour kicks off in San Diego on Tuesday February 18 with a show at the Casbah followed the next evening with a show at Los Angeles' The Bootleg on February 19. The tour crosses the US and sees them playing an approaching sell-out show at New York's Mercury Lounge on Saturday March 1. The full tour is listed below. While in the US Public Service Broadcasting have also confirmed an in-store at Rough Trade in Brooklyn, a Tiny Desk session at NPR as well as live performances with KCRW's "Morning Becomes Electic," WFUV & KEXP and will be ending this North American run with a packed schedule at SXSW. There the band will be playing at the British Music Embassy on the BBC Introducing Stage on Thursday 13 March as well as additional soon-to-be-announced shows. The band remain available for day party offers - please get in touch if you would be interested in hosting their unique AV show in Austin! Previously Public Service Broadcasting released a video for their single "Signal 30." Tour Dates: 2/18 - San Diego, CA - Casbah 2/19 - Los Angeles, CA - Bootleg Theatre 2/20 - San Francsico, CA - Slim's 2/22 - Portland, OR - Doug Fir Lounge 2/23 - Seattle, WA - Nectar Lounge 2/25 - Chicago, IL - Schubas Tavern 2/26 - Toronto, ON - The Drake Underground 2/28 - Boston, MA - Cafe 939 3/1 - New York, NY - Mercury Lounge 3/4 - Washington, DC - Black Cat 3/5 - Durham, NC - The Pinhook 3/6 - Atlanta, GA - Masquerade 3/7 - Savannah, GA - Savannah Stopover Festival 3/13 - Austin, TX - Official SXSW Showcase - BBC Introducing @ British Music Embassy Tickets for all shows available from: http://publicservicebroadcasting.net/north-american-tour-2014/ Inform- Educate - Entertain - the debut album from Public Service Broadcasting - was released in the US in November via Test Card Recordings and is available on CD, vinyl and digital via all good record shops and online retailers. The week prior to release the album streamed on NPR who said: "Together, the duo explores the past as it looks into the future, with music meant for clubs that doesn't fit neatly into some EDM subgenre or nightlife cliche. It doesn't force you to dance; it isn't incessant so much as bouncy. It's more Kraftwerk than Disclosure. It all sounds fresh" The album was previously released in the UK to wide-spread critical acclaim. It was one of Rough Trade's "albums of the year", voted 9th best album of the year by BBC 6 Music DJs & staff and landed on many "best of 2013" lists. They have also impressed with their live shows in the UK which has included dates with The Rolling Stones, New Order, The Manic Street Preachers, sold out headline shows and playing many UK festivals including Glastonbury, Greenman, EOTR, Secret Garden Party amongst many others. "(PSB are a) high- concept duo from London. One played drums, the other handled banjo, guitar, laptop and keyboards; their songs, filled with optimistic aspiration." The New York Times (CMJ pick) "Ok, this may the best new thing for me at #CMJ complete w robot voice, banjo, samples, drums, film and they rock. Public Service Broadcasting." NPR ("All Songs Considered" instagram / tweet) "Thrilling New Band Alert... (Public Service Broadcasting) are worthy of your attention... (they) do something that's actually pretty innovative....there's a really amazing video mixing/collage thing they do in their live performance that's really... distinctive. " Dangerous Minds "The most pleasant surprise of the 50 some odd bands I saw at CMJ this year was undoubtedly the London-based pseudonymous musical duo known as Public Service Broadcasting ... Think R2D2 meets RJD2 in an editing workshop at the Anthology Film Archives, with an ipod featuring DJ Shadow, The Books, El Ten Eleven, STRFKR and Kraftwerk." KCRW "Pretty propulsive stuff" Brooklyn Vegan "Public Service Broadcasting repurpose old films to new effect, and it works beautifully... Artful and evocative" The Guardian 4* Album of the Week "Adrenalised post-rock and electronics...Gripping" Mojo 4* "Inspirational stuff" Top Tips for 2013" Time Out London Absolutely essential listening" 5* Artrocker - Album Of The Month Publicservicebroadcasting.net Facebook.com/publicservicebroadcasting Twitter @PSB_HQ Embed code for "Everest" : <iframe width="1280" height="720" src="//www.youtube.com/embed/yecngAIMV1Y" frameborder="0" allowfullscreen></iframe> Inform - Educate - Entertain had its UK release in May of this year to much critical acclaim reaching #21 in the UK chart. It was called a "A triumphant debut" by Time Out London and "terrific" by GQ. Mojo is also behind this band giving the album a coveted "4" calling it "gripping." The Guardian named it "album of the week" and said, "Public Service Broadcasting repurpose old films to new effect, and it works beautifully... Artful and evocative" Taking in archive material from the BFI and StudioCanal along with classic American public information films (such as the brutal driving-safety messages found on "Signal 30") the album sees the corduroy-clad J. Willgoose, Esq. and his faithful drumming companion, Wrigglesworth, seeking to fulfil their mission statement over a wide range of subject matter and styles. Through both the record and their uniquely spell-binding live audio-visual 'Transmissions', audiences will witness the band weave samples from these films around live drums, guitar, banjo and electronics, creating an array of diverse tracks. What emerges is, by turns, thrilling, moving, funny and powerful; or, if you will, informative, educational and - most of all - entertaining.